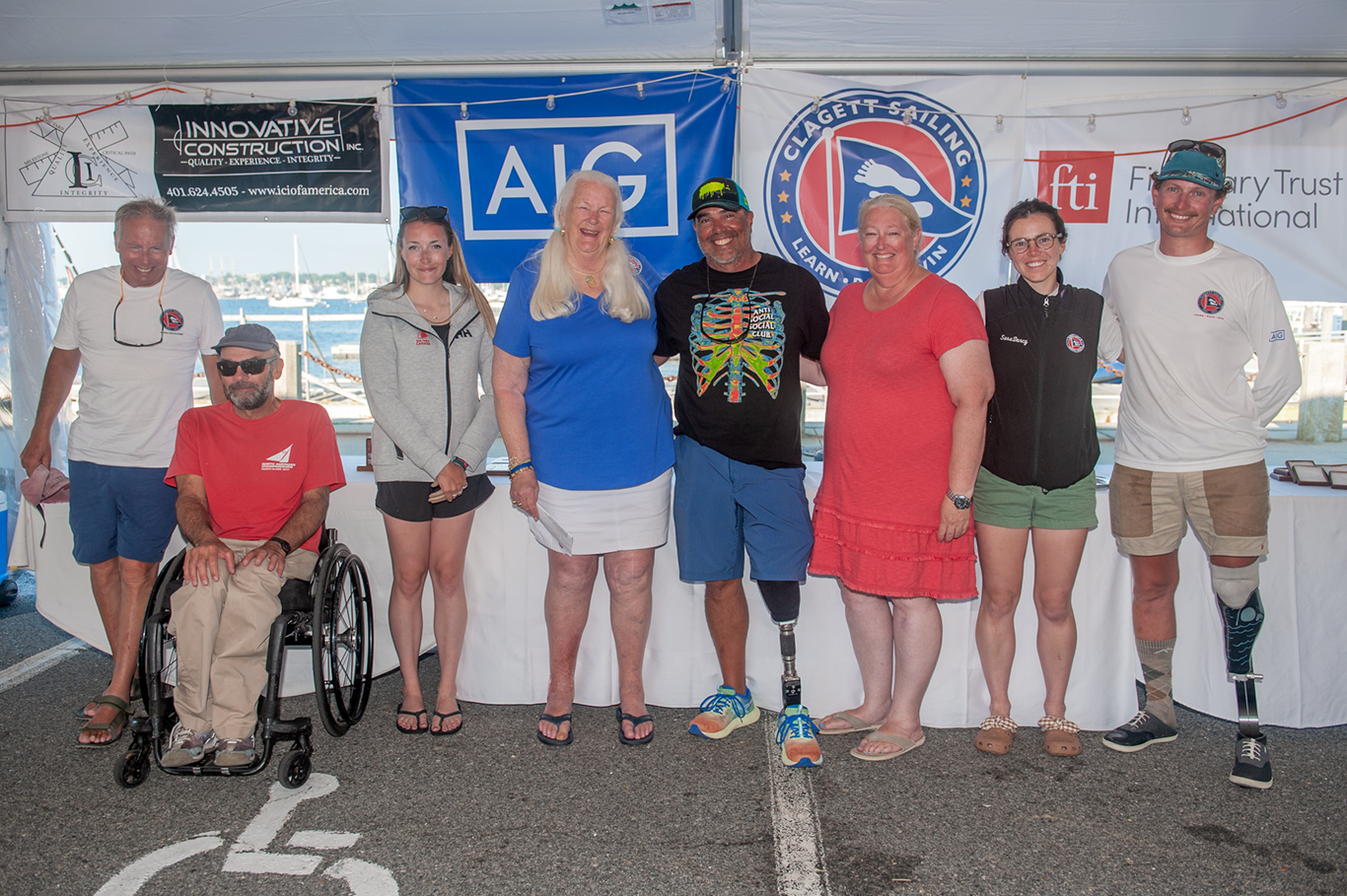 NEWPORT, R.I. (November 1, 2022) – In seven days, representatives from the United States, Canada, and the Caribbean will be putting on Team Clagett colors to represent Clagett Sailing, which has supported disabled sailing in North America for the last 20 years at the C. Thomas Clagett Jr., Memorial Clinic and Regatta.

These five sailors competed at the 20th Anniversary C. Thomas Clagett Jr., Memorial Clinic and Regatta in in Newport in June of this year. The top 2.4mR sailors with disabilities earned a place on Team Clagett as well as the top Clagett Boat Grant recipient sailor.

Delani Hulme Lawrence, who is a 2017 Clagett Boat Grant Program recipient of the 2.4mR boat she will sail in Tampa, spoke about being selected as part of the team, “I am honored to be a part of Team Clagett as I head into my first Open World Championship in the 2.4mR. Being a part of Team Clagett means that I get to represent an organization that has given me so much. I have grown exponentially as an athlete since becoming a Clagett Boat Grant recipient. I feel confident heading into this competition, knowing I have the support of Clagett Sailing behind me.”

Chris Childers, who sailed at his first C. Thomas Clagett Jr., Memorial Clinic and Regatta in June of this year remarked, “Having the support of Clagett Sailing for my first 2.4mr World Championship is super exciting. It’s going to be an incredibly competitive regatta, so training with a team and having coach support is going to make a big difference."

Supporting the sailors in a coaching role will be Marek Valasek (Williams Bay, Wisconsin). Valasek represented Slovakia in the 1996 Olympic Games in the Finn class and has coached professionally since 2000. He was first introduced to adaptive sailing in Florida in 2001 when he was hired as a personal coach and sparring partner for a 2004 Paralympic campaign. In 2018 he was the US Sailing coach for the US Team at the Para World Sailing Championship, where the team captured third place in the 2.4mR class. “The "mini 12" (2.4mR) is one of my favorite boats to sail and I am always looking forward to working with sailors who share the passion. Two years ago, I was offered to work with Team Clagett at the Worlds which were ultimately cancelled due to COVID. I feel very privileged to have been given the opportunity again this year,” commented Valasek.

Forty one entries from nine countries make up the fleet descending on Davis Island Yacht Club. The fleet consists of numerous former world champions and defending world champion, British sailor Megan Pascoe. Former 2.4mR World Champion Marko Dahlberg from Finland, who has been a coach at the Clagett Regatta in Newport previously will be lining up against the Team Clagett sailors. Multiple Clagett Sailing alumni who have sailed in Newport at a Clagett Regatta will be on the start line alongside all with the same goal to finish on the podium.

Clagett Sailing alumni sailor Brad Johnson (Pompano Beach, Florida) will be managing the team and sharing his experiences from representing the USA at multiple Paralympic Games in a number of sports. “The Clagett Regatta was my introduction into the family of sailing. The dedication to facilitate a great overall experience, learning and competitiveness, abounds in every individual volunteering to assist the sailors. As such, I am honored to join Team Clagett as the team manager," said Johnson.

Quantum Sails is sponsoring Team Clagett by assisting with providing the Team Clagett sailors with new sails. “Quantum Sails is extremely excited to sponsor Clagett Sailing and their team at the upcoming 2.4mR World Championship. As part of our support of this program, Quantum donated sails to one of Clagett's Boat Grant recipients to make sure they have the best sails, resources, and expertise to help them perform their best at Worlds. Quantum is dedicated to supporting accessibility initiatives to get more people on the water and enjoying the sport of sailing. We hope to augment our support and continue to provide resources to this group of athletes going forward. Best of luck to Team Clagett team at Worlds!” said Carter Cameron (San Diego, California), One Design Specialist Quantum Sails.

Clagett Sailing has evolved over the last 20 years into a multifaceted organization providing opportunities and programs for sailors with disabilities, enabling them to Learn-Race-Win; Learn-to Reach for Success, Race-in the Corinthian spirit, Win-self-empowerment.

For results during the 2.4mR World Championship visit: https://diyc.org/racing/2022-2-4-mr-world-championships/

Clagett Sailing would like to thank the following - Fiduciary Trust International, The Roxe Foundation and Quantum Sails