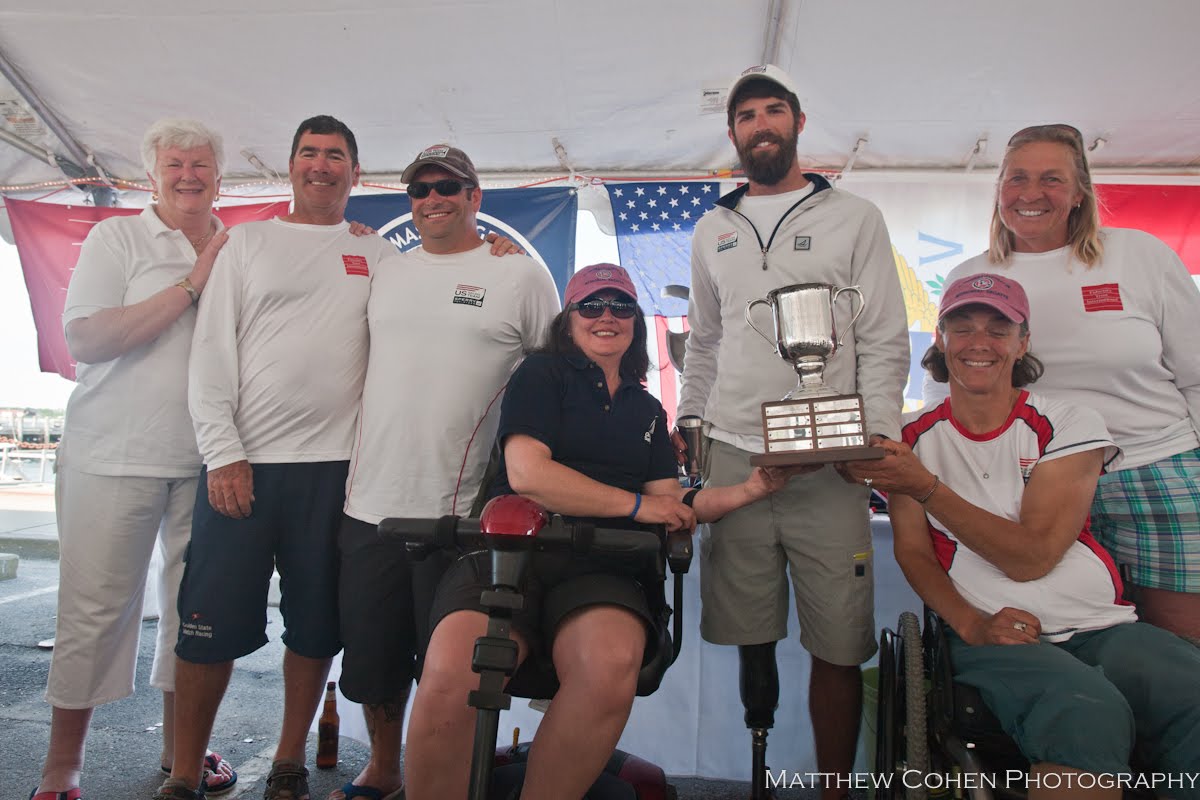 NEWPORT, R.I. (June 15, 2014) – Newport turned on the charm for the start of the final day of racing at the Clagett. After two days of testing conditions on Narragansett Bay, the three classes racing took to the water an hour early to take advantage of the northerly breeze.

Heading into the final day Ted Green III (Newport, RI) led the 2.4mR fleet with a nine point lead over Peter Wood (Ottawa, Ontario). In a 12 knot northerly the fleet got underway for race five of the series and Mark Bryant (Estero, FL) took advantage of a good start to win the first race of the day with another Floridian Daniel Evans ( Miami, FL) taking the second place and Peter Wood scoping third. Overnight leader Green III retired from race five after damaging his headsail in a mark rounding incident. Race six of the series and Charlie Rosenfield (Woodstock, CT) returned to the top spot with Green III back in the hunt finishing second and Wood taking his second third place for the day.

After a drop in breeze strength for race seven, which ended up being the last race for the series, the current around Goat Island became a determining factor in where the competitors finished. Green III finished off the regatta on a high note taking the final gun for the series. Tony Pocklington (Fort Meyers, FL), who is the boat builder for the 2.4mR class, crossed the line in second and Wood completed the top three. With a seven race series completed a drop result came into play and Ted Green III came out on top of the 2.4mR class. Wood took the silver medal place and Pocklington rounded out the top three 2.4mR's in the bronze medal spot.

"It's been a very tough regatta and after my first race today I was really hoping we'd get the seven races in so we could drop a race. I have been sailing to 2.4mR for one year, my first regatta was the Clagett in 2013 and ideally I'd like to be at the 2020 games but if I made Rio even better. This event is great as you can benefit from the clinic and then put the skills and techniques into your game plan during racing. Next for me is the Newport Regatta then I'm going to the IFDS Worlds in Halifax. I had a good result on a tough couple of days," commented 2.4mR class winner Green III.

Race six and Porteous/Walker had a two point separation from McRoberts/Gay as they set off up the race course. The Canadian pair (McRoberts/Gay) scooped the win with Sarah Everhart-Skeels (Tiverton, RI) and Gerry Tiernan (Falmouth, ME) improved on race five with a second place and Porteous/Walker kept it tight on points with a third place finish.

Race seven for the SKUD 18 class was make or break for the two teams, Porteous Walker (USA) and McRoberts/Gay (CAN), on equal points again. Everhart-Skeels/Tiernan race a terrific race, in tough conditions with a very big current influence in very light breeze, to win after the race committee shortened the course in the dying breeze. The Canadian team, McRoberts/Gay finished second and Porteous/Walker took the third and with that, the drop race came into play and the overall winners where the Canadian husband and wife, McRoberts and Gay with Porteous and Walker finishing second by a two point margin and Everhart-Skeels/Tiernan taking third place.

"This is our third event together as a crew so it was a test for us. Communication is very important in the very challenging conditions we've had the last couple of days so it has been a great opportunity for us to practice and also work on the mental aspect of competition. This is John's second time at the Clagett and I was last here two years ago in the 2.4mR. We are going to Halifax and will try to qualify Canada for Rio," said McRoberts and Gay after a challenging series.

Sonar team of Ricky Doerr (Clifton, NJ), Tim Angle (Reading, MA) and Hugh Freund (Brookline, MA) have lead the class from the first day and after three races today have defended the gold leader flag to turn the flag into gold medals. In a closely fought battle in the class, Paul Tingley (Halifax, Nova Scotia) and his Canadian team of Scott Lutes (Montreal, Quebec) and Logan Campbell (Saskatoon, Saskatchewan) laid down the challenge and finished up in second place by one point. Greenwich, CT local Andy Fisher and his crew Mike Hersey (Hyannis, MA) and Brad Johnson (Pompano Beach, FL) kept in touch with the leaders over the seven race series to finish in third place with two points separating second and third.

Doerr remarked, "The level of competition at Clagett gets better and better each year. It is a spectacular event to be part of and I want to thank my crew, they are the ones that make it happen. Newport is a great location for accessible sailing resources for a sailor with disabilities."

Doerr's crew Tim Angle commented, "There is a huge range of skill level at this event and as a team that has taken part over many years we can play a role in mentoring others as to what they can achieve. It feels great to win against good competition and every year you meet new sailors and it's a chance to get them excited about the sport and also get excited again yourself about what you are doing each day on the water."

The third crew on Doerr's Sonar, Hugh Freund, who was awarded the Nick Scandone Award, said dockside," This regatta is extremely fun which is very important because sailors who are having fun sail better. I tend to use the experiences I have at Clagett to motivate me during other events because you can take the fun moments away with you."

The final day of racing at the 2014 C. Thomas Clagett, Jr. Memorial Clinic and Regatta wraps up another successful regatta and as the organization continues into its second decade, the event continues to grow in popularity among the disabled sailors in North America. With the support of long term sponsors and volunteers the event moves into its 13th year with a glowing track record and the dates for 2015 are now confirmed for June 24-28, 2015.

"One of the major things I have spoken with Clagett sailors about is the sense of empowerment they feel taking part in this event. This can be carried through from the Clagett to your every day lives. This event is supported by some long term sponsors some who have been with us since the event started - Fiduciary Trust International, AIG, Innovative Construction and Crystal Springs along with volunteers who return year after year to make this event happen. I was told be someone at the event there's no one here with a disability, everyone just has a different ability. I look forward to seeing you back at the 13th Clagett in 2015," commented event co founder Judy McLennan.