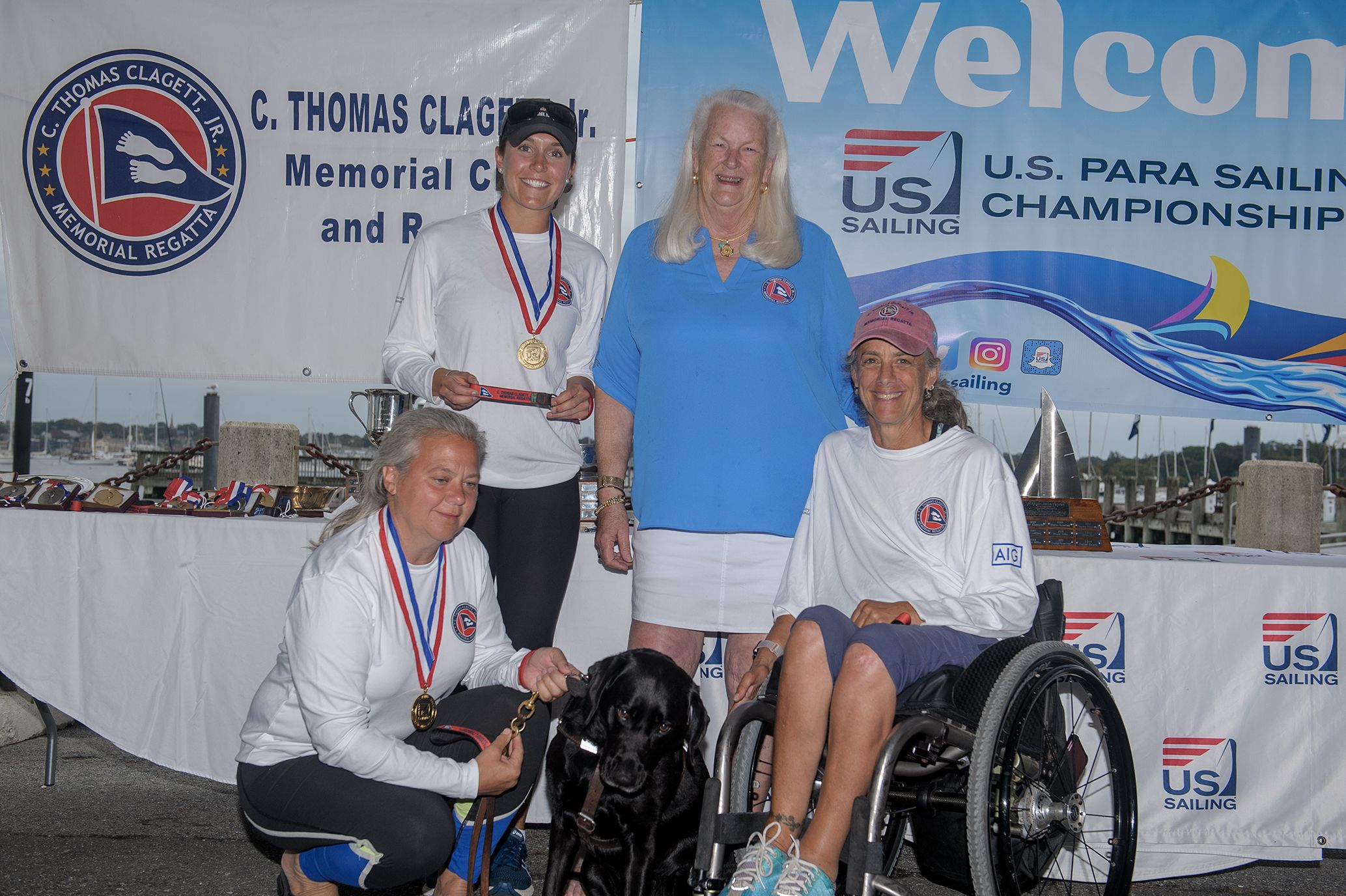 NEWPORT, R.I. (August 29, 2021) – The final day of racing at the 18th C. Thomas Clagett, Jr. Memorial Clinic and Regatta and the 2021 U.S. Para Sailing Championships has wrapped up for the 23 boats in the 2.4mR, Martin 16 and Sonar classes competing in Newport over the last two days.

Judy Clagett McLennan, Clagett Co-Founder and President remarked at the awards ceremony, “In the words of Stephen Hawking - However difficult life may seem, there is always something you can do and succeed at. It matters that you don’t just give up. We have had a wonderful five days seeing everyone back in Newport for the 19th Clagett Regatta and the 18th on the water. I’d like to thank so many people the coaching team, the yacht clubs who provided support boats, Sail Newport and RI DEM for the venue, all the Clagett sponsors and especially the volunteers who return year after year, they all make it happen. We’ve had 37 sailors here this week and 95 volunteers. I’d also like to announce the dates are set for the 20th year of the Clagett Regatta which will be held June 21-26, 2022, we look forward to seeing you all back here next year.”

US Sailing President Cory Sertl spoke at the awards, “This is a special event and I’d like to thank Judy and Stephanie McLennan along with all the volunteers for helping out. I also want to thank Judy for having the foresight to bring coaching to this regatta it makes it very special.”

The last day for the 2021 regatta started out with a light South Easterly breeze that topped at eight knots with the current increasing during the three races for the 2.4mR and Martin 16’s who sailed in an area similar to yesterday between Rose and Goat Islands. The Sonar fleet returned to the race course they used on Saturday North of the Pell Bridge near Coasters Island completing two races today.

Taking home the gold medal for the largest fleet in the regatta, the 2.4mR fleet is Paralympian Dee Smith, who won this class in 2015 prior to going to the Rio Games in 2016. Taking the silver spot in the class is fellow Floridian Rudy Trejo and rounding out the top three is Julio Reguero from Puerto Rico who is sailing in his new boat from the Clagett Boat Grant Program.

“It was great competition over the two days and a big thank you to the PRO Tom Duggan and his crew for getting racing done in difficult conditions. Thanks to my fellow competitors for some great competition here in Newport,” said Smith after racing.

In the three boat Sonar fleet, longtime Clagett sailor Sarah Everhart Skeels and her crew of Pauline Dowell and Emma Montgomery who both hale from Massachusetts, won the class after six races. The all female crew held off the team from Lake George representing the Y-Knot program with skipper Dave Whalen and crew members Spencer Raggio and Dan Kennedy. Completing the class is the team with its helmsman from Chicago Patrick LoDuca and his team of Bryan Tabler and Dawn Hart.

Everhart Skeels remarked, “We thoroughly enjoyed all the sailing conditions Newport had to offer, it was challenging but worth the effort. I can only thank my crew for all their effort and for being an amazing strong female crew.”

The doubled handed class of the Martin 16’s has a return winner with Californian Carwile LeRoy, who raced with a local Newport crew member Doug Horsey, taking his second Martin 16 class win at the Clagett Regatta. In second place is Nick Bryan Brown and his crew Albert Pierce, who is brother to Robie Pierce who was the visionary behind The Clagett. Rounding out the top three for the fleet is Colin Smith and his crew Siobhan Murphy traveling from Vermont for racing in Newport this week.

LeRoy spoke after racing, “It was great to be able to defend my title in the class from 2019. It came down to the last race of the last day, so I’d like to thank the PRO for getting the three races done today! Nick and Al had great boat speed and made it a great challenge on the water. This is the best run regatta around the coaching and volunteers are amazing.”

For more information about The 2021 Clagett and U.S. Para Sailing Championship, including Notice of Race and registration information, please visit: www.clagettregatta.org