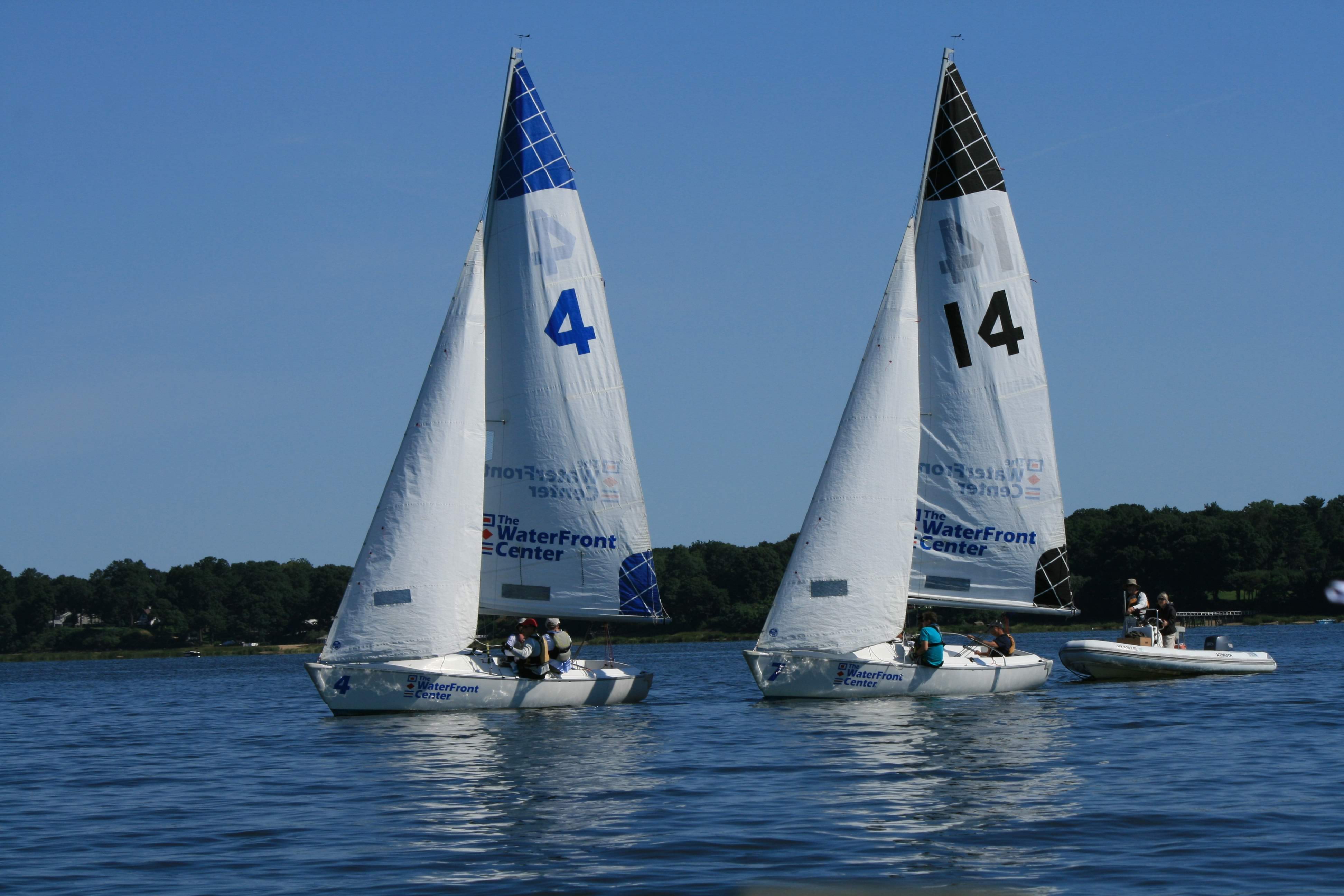 Oyster Bay, N.Y. (September 30, 2018) – Over the past three days, 24 sailors with adaptive needs gathered in Oyster Bay for the third annual Clagett/Oakcliff Match Race Clinic and Regatta. The WaterFront Center donated their Sonars for use in the regatta and Warrior Sailing Program rigged them with the adaptive equipment. Sagamore Yacht Club generously offered their facilities and docks for the regatta.

Five-time US Match Racing Champion Dave Perry and America’s Cup legend Dave Dellenbaugh gave the competitors a crash course on match racing from the basics all the way through to advanced penalty skills. The practice day was a case of practicing what they were taught and the first day of the regatta executing these skills.

Kevin Holmberg (Tampa, Fl.) and his crew of Noah Barrengos (San Francisco, Calif.) and Jeff Long (Newport, R.I.) came out on top, not losing a single match. Holmberg first competed in the Clagett regatta seven years ago but this was his first time match racing and competing in the Clagett/Oakcliff Match Race. Holmberg usually races in the single-handed 2.4mR class and recently raced in the World Sailing Championships in Sheboygan, Wis.

“I really enjoyed sailing with a crew and have learned a lot this weekend,” said Holmberg. “I’m looking forward to doing some sailing in the WETA trimaran soon.”

Improving on their 2017 result and finishing in second place was the team of skipper Charlie Rosenfield (Woodstock, Conn.), Tim Ripley (Randolph, N.J.) and Stuart Caplan (Larchmont,N.Y.) who only lost one match out of seven over the two days of racing. This trio commented after sailing that they continue to learn so much from the coaches and racing in the match racing format that they hope they can do a lot more. Caplan actually coached Ripley over 25 years ago and said, “I’ve learned so much here at this regatta. It is concentrated learning and unbelievable tutelage.”

Rounding out the podium for this year in third place is the team of skipper Rick Doerr (Clifton, N.J.) Matt Amatruda (Guilford,Conn.) and Charles McClure (Brookline, Mass.). Doerr, who raced with McClure at this regatta last year, said after sailing, “This year we had better breeze and the level of competition has stepped up a level. It’s great to see teams bringing great sailors to the mix and I enjoy wrapping up the summer sailing season with this regatta.”

Coach of the last three Clagett/Oakcliff Match Race Clinic and Regattas, Dave Perry remarked, “The improvement in the racing between the first day and the final day today has been very notable. Overall the racing level has become better.”