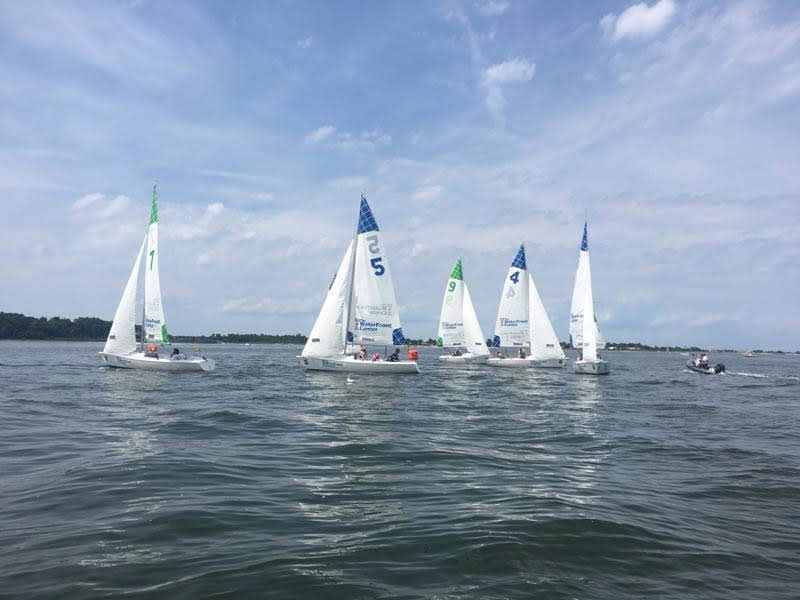 NEWPORT, R.I. (February 4, 2018) – In recognition of her years of dedication and commitment to sailors with disabilities and adaptive sailing, President and Co-Founder of the C. Thomas Clagett, Jr. Memorial Clinic and Regatta, Judy McLennan, was awarded the Gay S. Lynn Memorial Trophy at the U.S. Sailing Leadership Forum on February 1.

This award recognizes the 16 years of commitment McLennan has invested in The Clagett and its mission “to assist sailors in realizing their potential on the water by providing them both the knowledge and tools to improve their skills and the opportunity to use these skills in competition", and to make her father Tom Clagett’s motto, to "Reach for Success" a reality for adaptive sailors.

It was in 2002 when the seed was planted; Judy and Stephanie McLennan met with Robie Pierce to discuss creating a sailing regatta and clinic for disabled sailors, which had a strong coaching component to it. A year later, in 2003, the first C. Thomas Clagett, Jr. Memorial Clinic and Regatta was held in Newport, R.I.

Over the 16 years that The Clagett has been held, it has gone from strength to strength and in 2016 expanded its scope to partner with Oakcliff Sailing in Oyster Bay, N.Y. to create the Clagett/Oakcliff Match Race Regatta. This regatta provides an opportunity for adaptive sailors to learn a new racing format and benefit from the match racing coaching.

When being presented with the Gay S. Lynn Memorial Trophy, McLennan remarked, “Sixteen years ago a dear friend of mine and a friend to many in this room, and a very accomplished sailor, and winner of this award in 2004, Robie Pierce, came to my daughter, Stephanie and me and asked if we would be interested in starting a program for sailors with disabilities based on the success of both the Leiter and Ida Lewis Championships which my father had started for junior women. Back in 2003 when we started The Clagett, there were regattas for sailors with disabilities, but there were none that incorporated the clinics and coaching that these sailors needed to progress to higher levels of racing. Robie wanted the best coaches, the best race management and the best venue available for these sailors. If a sailor did not have the funds to pay for private coaching, this was not to be a hindrance to stifle their abilities. The Clagett would provide the best coaches possible.

She continued, “Sixteen years later, of the sailors who have come to The Clagett, 19 have medaled at the Paralympics and there have been numerous podium finishes at World Championships as well. In fact, you might remember that the only U.S. sailing medals that were won in London, was the Paralympic Team of Jen French and her crew JP Creignou. Competitive sailing has given some of these sailors a reason to live, a sense of purpose and in many instances; it has created positive life changing experiences. Sailing is so equalizing and freedom giving.”

McLennan discussed the continuing expansion of The Clagett opportunities for adaptive sailors and efforts to have sailing reinstated at the Paralympics, “When sailing was removed from the Paralympics for 2020, it was a great disappointment to many. The Clagett vowed to join forces with US Sailing and fight to get sailing back into the Paralympics in 2024. We have continued our training in fleet racing in Newport and we have added to our program a partnership with Oakcliff Sailing Center on Long Island to help teach Match-racing to sailors with adaptive requirements. We have started a boat grant program similar to the one in the Lightening Class, and we recently completed a three year study on life jackets. We should all commend Betsy Alison and her committee at World Sailing for all their efforts so far. These efforts have been rewarded in that sailing has made it through the first stage of the application to get sailing returned to the Paralympics. With more work we all hope that the news will be good for our sailors in January of 2019.”

In wrapping up McLennan said, “Everyone in this room can assist in this effort. I challenge each of you to open up your Yachts Clubs, and your sailing programs to include sailors with adaptive needs. Sailing opportunities need to be expanded. In order for the U.S. to continue on the road to medals in Paralympic sailing and other top levels of competition. These sailors must be given opportunities to learn and to race.”