That's a wrap for the thirteenth Clagett Regatta 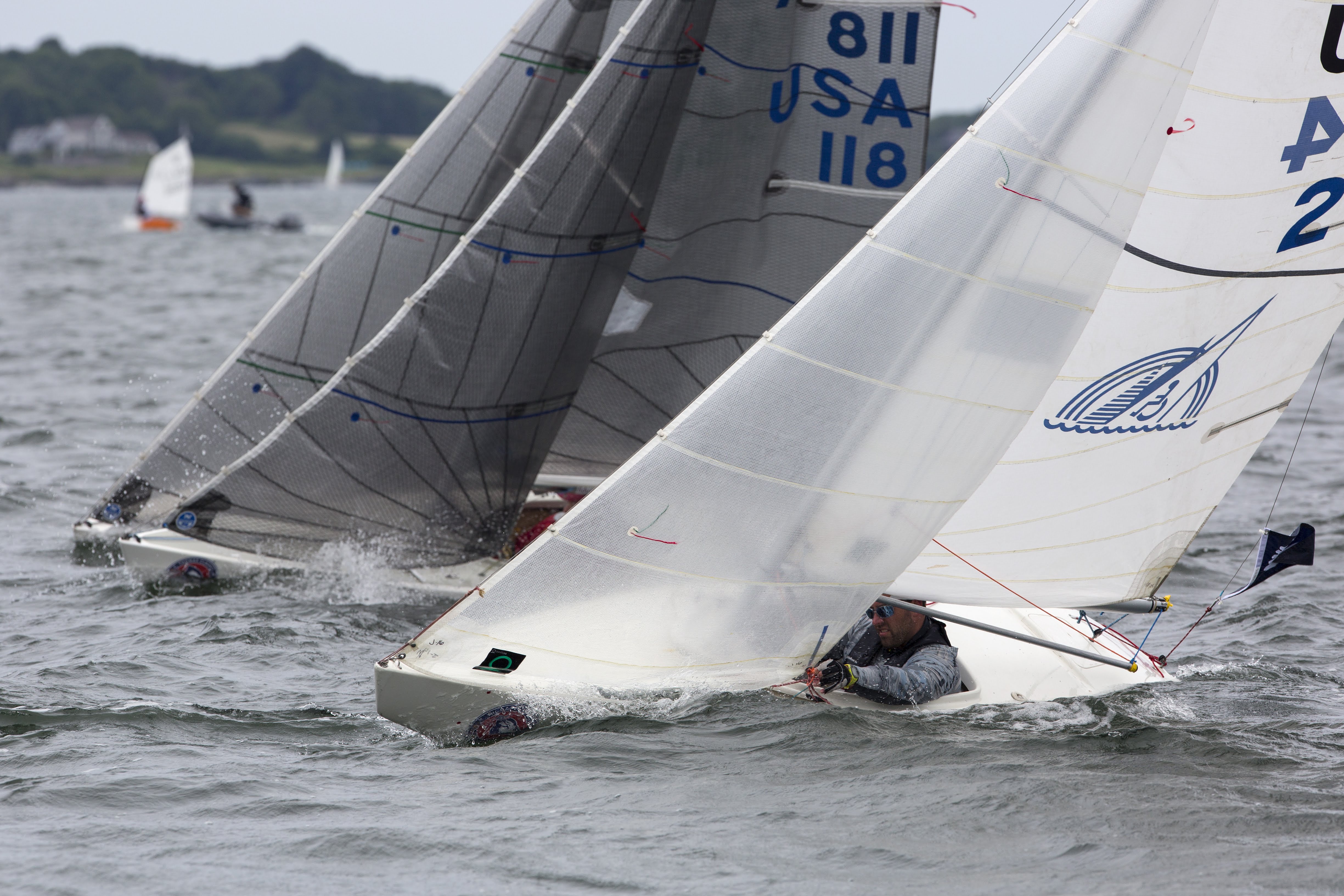 NEWPORT, R.I. (June 28, 2015) – After a day of a coaching clinic and three days of racing on Narragansett Bay the 13th C. Thomas Clagett, Jr. Memorial Clinic and Regatta finished up today. Overnight the forecasted winds and rain made for a wet and grey start to the day for the 25 Clagett boats, docked at the Sail Newport Alofsin Pier in Fort Adams State Park.

After a meeting this morning of the Clagett Race Committee and officials, it was decided to take the three fleets out and get racing underway. A race course was set off of Goat Island with a Northerly wind direction at 15 knots and the first fleet to hear the starters gun were the Sonar class.

"Today turned out to be a very reasonable race day after the extended delay to let the squall line through which was left over from the storm last night," said Clagett Principal Race Officer, Ron Hopkins (Bristol, RI).

In the eight boat Sonar fleet it came down to the last day of racing to decide who would take home the top prize. The Canadian team skippered by Paul Tingley (Toronto, Canada) and crewed by Scott Lutes (Nova Scotia, Canada) and Logan Campbell (Saskatchewan, Canada) managed to take the gun in all four races today. The US Sailing Team Sperry crew of Rick Doerr (Clifton, NJ) and his team of Hugh Fruend (South Freeport, ME) and Brad Kendell (Clearwater, FL) who have been the lead boat for the first two days have finished the regatta in second place after a third and forth finishes today.

Paul Tingley, the winning Sonar skipper commented, "We got the boat dialed in today to the right settings and found our boat speed and it showed in the results today. We have qualified for Rio so our regatta schedule going forward will include the Open Sonar Worlds in September and then heading down to Melbourne for the ISAF Worlds in November."

Clagett first time participants, the sailors in the Warrior Sailing Program, finished a respective forth and fifth in the Sonar class. The team skippered by Preston Scholfield (Tampa, FL), were taking part in their first competitive sailing regatta and finished in forth behind the two US Sailing Team Sperry teams and the Canadian Sailing Team Sonar.

One point separated the first and second place in the SKUD 18 class. Ryan Porteous (San Diego, CA) and Maureen McKinnon (Marblehead, MA) took the gold spot with Sarah Everhart-Skeels (Tiverton, RI) and Cindy Walker (Middletown, RI) right on their heels in silver. These two teams are both on the US Sailing Team Sperry Paralympic team. Wrapping up the bronze position was Tracy Schmitt (Toronto, Canada) who sailed with Kay Van Valkenburgh. In 2014 Tracy sailed a 2.4mR at the Clagett and this year wanted to see how the purpose designed SKUD 18 would be to sail.

"It was great having the two other boats out there with the class. It raised the level of competition and both teams are new to the boat. It was great to have them on the start line and pushing us over the three days. We are doing the Newport Regatta next and will be at the ISAF Worlds in Melbourne, Australia in November," said Porteous after racing.

The 2.4mR 's had another two races today to complete an 11 race series. Overnight leader, Dee Smith (Annapolis, MD) held on to his position in first to take the win in the 13 boat class. This is Smith's first Clagett regatta. Peter Wood (Ottawa, Canada), a six time Clagett participant, kept the second place and Tim Ripley (Randolph, NJ) rounded out the podium for the 2.4mR's.

"This is an incredibly run regatta, one of the best I have been to. From the Race Committee to the docks and volunteers and the hospitality. I'd like to thank both Ted Green II and Ted Green III for loaning me boats and for the opportunity to sail in The Clagett," remarked Smith after winning the 2.4mR class today and the C. Thomas Clagett, Jr. Trophy for 2015.

"I'd like to give a huge thank you to so many people. Without the team we have working, on the race committee, jury, sponsors, Sail Newport and Fort Adams State Park staff, local Newport Yacht Clubs and many others this event would not happen. We've had another great year and look forward to seeing many of you back again next year and some new faces joining the ranks. We can confirm that the dates for 2016 are June 22 for registration, June 23 for the clinic with racing on June 24-26. We will give free entry in 2016 for the first registration once the Notice of Race is published," said Clagett co-founder and President Judy McLennan (Portsmouth, RI).