Sailors enjoy another day of challenging racing at the 14th Clagett 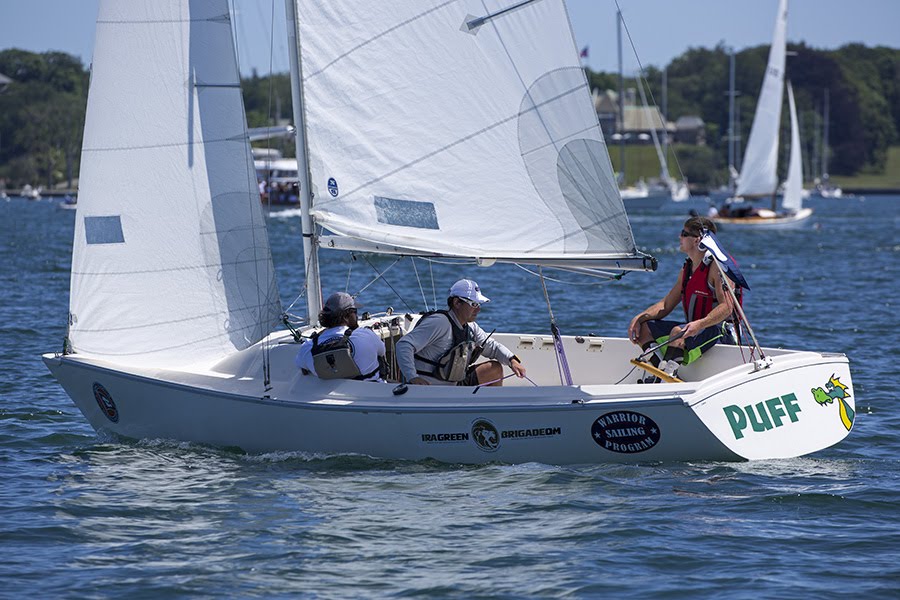 NEWPORT, R.I. (June 25, 2016) – Day two of racing at the 14th C. Thomas Clagett, Jr. Memorial Clinic and Regatta had a delayed start when the race committee held the sailors ashore while they waited for the breeze to fill in.

The 22 sailors taking part headed out to the course after an hour under the postponement flag and the race committee set up the course for a 10 knot South Easterly off the Northern end of Goat Island. Later in the day the breeze moved around to the South and dropped in strength before building again for the last race of the day. The tide was a contributing factor in today's racing with local knowledge benefiting the sailors.

"Things improved dramatically for me today on the race course. The conditions are what I prefer and I had a better tactical day on the water", commented Rosenfield.

The Sonar team from the Warrior Sailing Program, skippered by Joshua Agripino (San Diego, CA) continued their winning streak from day one to have a picket fence for results with seven first places over the two days of racing. The two boats took advantage of the opportunity to work on practice starts while racing today. Sailing with Agripino is main trimmer Scott Ford (Traverse City, MI) and jib trimmer Sammy Lugo (Tampa, FL). Ford and Lugo have been members of the Warrior Sailing Team for the past 12 months and all three Warrior Sailing Program team members will be racing at the upcoming J22 Worlds in August.

"The winds were pretty light today but we had a phenomenal day of racing against the team from the US Virgin Islands. We learned a lot of different sailing techniques and we prevailed when we were match racing against the other team", remarked Ford after racing today.

The forecast for the final day of racing on Narragansett Bay for the 14th Clagett is for a South East breeze of five to 10 knots.