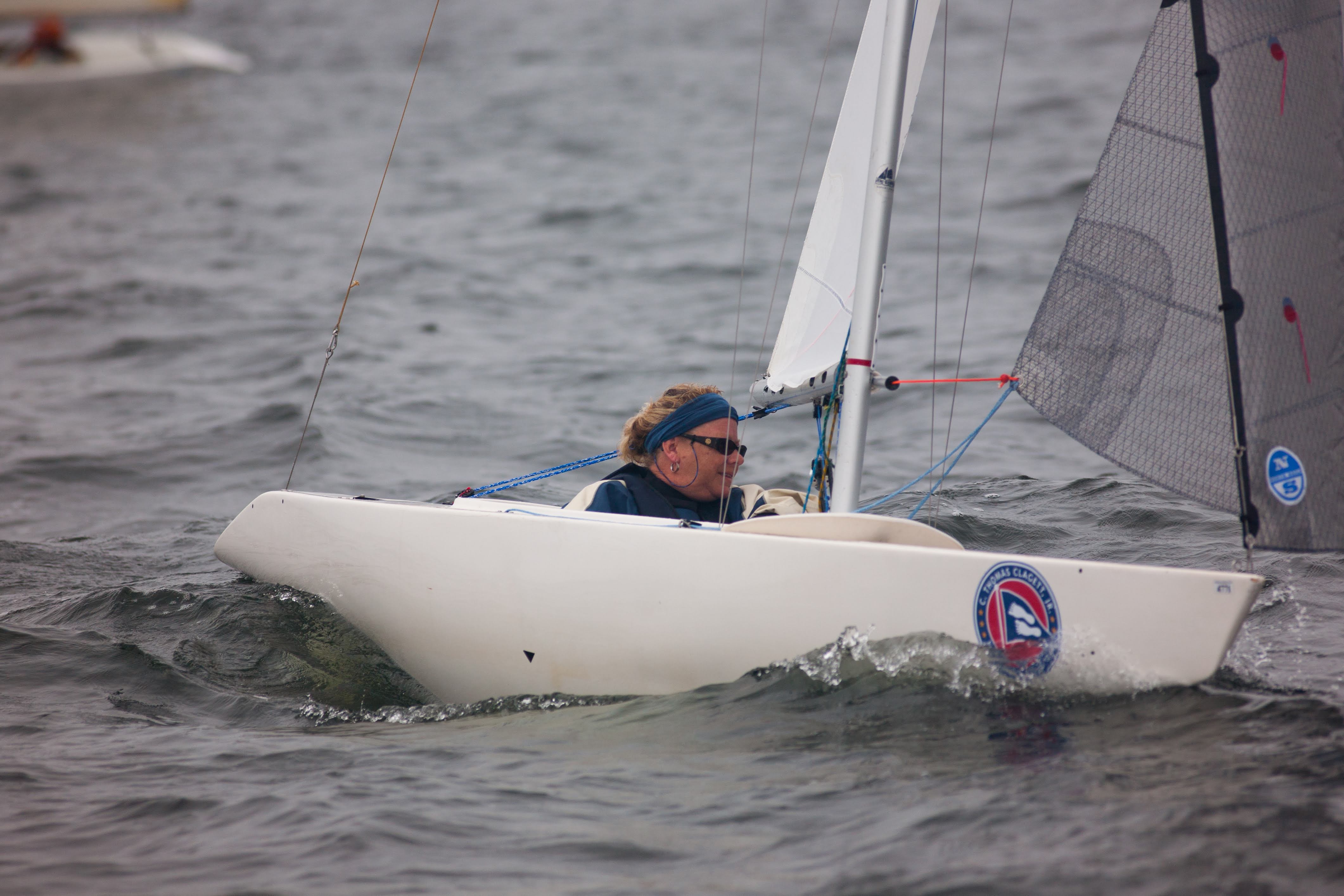 Today’s early fog across Narragansett Bay finally lifted enough by late morning to allow 36 sailors with disabilities to complete a final day of racing at the 11th annual C. Thomas Clagett, Jr. Memorial Clinic & Regatta. The event, held at Sail Newport in Newport, R.I., is open to both U.S. and foreign competitors and is known as an integral part of preparation for Paralympic and world championship racing. The competition is conducted in the same equipment used for the three classes that comprise the sailing event at the Paralympic Games, next scheduled for 2016 in Rio de Janeiro.

“The Clagett mission is to provide sailors with disabilities the opportunity to improve their skills and reach personal goals through world-class coaching and competition,” said the regatta’s founder Judy McLennan (Portsmouth, R.I.), explaining that a high-powered one-day clinic always kicks off the event, and the coaches involved with it work closely with the disabled sailors throughout the following three days of racing. “This year, among the sailors that took part on 23 boats we saw not only top Paralympic hopefuls who have been at it for years but also plenty of young people who are getting into the Paralympic classes for the first time. It was very special to see them getting so excited and gives us a lot of hope for the future of disabled sailing.”

Attesting to the regatta’s impressive reputation was US Sailing’s designation of the two-person SKUD-18 series here as the qualifier for two spots in that class on the 2013 US Sailing Team Sperry Top-Sider. Claiming those were first- and second-place teams, respectively, Ryan Porteus (San Diego, Calif.)/Cindy Walker (Abington, Mass.) and Sarah Everhart-Skeels (Tiverton, R.I.)/Gerry Tiernan (Falmouth, Maine).

“Going into today’s last race we were tied for first with Sarah and Gerry, and we had to beat them to win the regatta,” said Porteus, who edged out his rivals by only one point in the final standings. “They would gain the lead; then we’d gain the lead…until the last downwind leg, when they jibed and crossed us. But we calculated the current and tacked for the boat end of the finish line, which was closer.”

Porteus, who had only sailed the SKUD-18 for two days prior to this regatta and whose crew has only been sailing since last year, called the regatta a “real learning experience.” “I had my accident a year and a half ago and I was already a sailor, so I thought why not try this? The goal here was to have fun and just see what happened.”

According to Everhart-Skeels, who won the Sonar class in this regatta back in 2004 and last made the US Sailing Team in 2011, she and crew Tiernan had never sailed together before this event. “We made a mistake on the last downwind leg of the last race and gave it away, but we had three days of intense racing,” she said, adding that she is excited about the extra funding, coaching and logistical support the US Sailing Team designation means for the team’s 2016 Paralympic campaign. “It means I might go to the Worlds now. I’ve never been to Europe to represent my country in a world event.”

The SKUD-18, first introduced at the 2008 Paralympics, is a feisty 19-foot skiff with a tube-launched asymmetrical spinnaker and a modern high performance stayed rig. As with all the Paralympic class boats, it can be configured to suit different sailors’ needs.

Taking the regatta’s top prize—the C. Thomas Clagett, Jr. Memorial Clinic & Regatta Trophy—for best overall performance was current US Sailing Team member Daniel Evans (Miami, Fla.), who topped the one-person 2.4mR class, the largest here with 15 entries. One of his most fierce adversaries on the race course was Puerto Rico’s two-time Paralympian Julio Reguero, who won every race until today’s last two, which he missed because he was scheduled to leave the event early. Evans, who sailed consistently well, finished second or third in all but one of nine races. Discarding an allowed throw-out (a fourth in race three), he finished two points ahead of Ted Green (Newport, R.I.), a sailor new to the 2.4mR, and three points ahead of Reguero, who with two “Did Not Starts” today fell to third overall in the standings.

“I’ve competed against Reguero in Europe before; he’s been in the game a while and knows the boat well,” said Evans. After Evans was awarded the overall trophy, which was based on a formula applied by the organizers, he added humbly, “I am surprised. But I still feel Julio had all firsts, and he’s a better sailor; I still need to sail more and practice harder.”

Of all the Paralympic boats, the 2.4mR, at just under 14 feet long, is the only one where the skipper’s disability “ratings” (an assessment based on physical benchmarks) are inconsequential. (Disabled sailors all are classified by an impairment rating system, and in Sonars a certain rating cap is imposed.) Since both hand-steering and foot-steering are possible and everything is adjustable from right in front of the sailors, the 2.4mR is ideal for handicap integrated sailing.

Reguero, who is gunning for Rio 2016, says he returns regularly to this regatta because it’s one of the “nicest regattas” in the U.S. “It is good training; everyone helps one another, and the race committee is really good,” said Reguero.

In the class for the three-person Sonar, it was another close battle between two teams all regatta long, but in the end it was Paralympian Rick Doerr (Clifton, N.J.) with crew Hugh Freund (S. Freeport, Maine), Lindsay Smith (Marblehead, Mass.), and Brad Kendell (Tampa, Fla.) who topped the scoreboard, posting 11 points to Andrew Fisher (Greenwich, Conn.), Mike Hersey (Hyannis, Mass.) and Adam Parks’ (Henderson, Nevada) 15 points.

“On the first day, in 15-16 knots, we didn’t have the boat speed, but then we got better on the second day when it was a little windier,” said Doerr, who hasn’t sailed with his crew Freund and Kendell (members with him on the US Sailing Team) since January. He described today as lighter (five to ten knots) but testing, as he paced with Fisher’s team at the front of the fleet. “We won all four of today’s races, but in the first race we only won by a boat length…in the second race we thought they’d roll us right at the finish, and we got two guns one after the other. This is a great venue for good breezy sailing, and the training is good for getting your timing down.”

The Sonar, at 23 feet, is the more traditional looking of all the Paralympic sailboats, with a large cockpit well suited for adaptations to accommodate the different disabilities of its crew.

Photos, full results and additional information can be found at www.clagettregatta.org

About the C. Thomas Clagett, Jr. Memorial Clinic & Regatta: Founded in 2002, the C. Thomas Clagett, Jr. Memorial Clinic and Regatta honors the late Tom Clagett (1916-2001), a U.S. Navy World War II veteran who learned to sail on Chesapeake Bay. As a youngster he suffered temporary paralysis as the result of a bout of meningitis; an experience that left him with a deep respect for the accomplishments of people with disabilities, especially athletes. “The Clagett” began as an event for a single class of boat with a stated mission of assisting sailors in realizing their potential on the water by providing them – through the one-day clinic that precedes racing – both the knowledge and tools to improve their skills, and the opportunity to test them in competition. Collectively, six medals have been won at the Paralympic Games (2008 and 2012) by veterans of The Clagett, which has earned a well-deserved reputation as North America’s premier event for sailors with disabilities.