Racing for day two of The Clagett on the books, day three is weather dependant 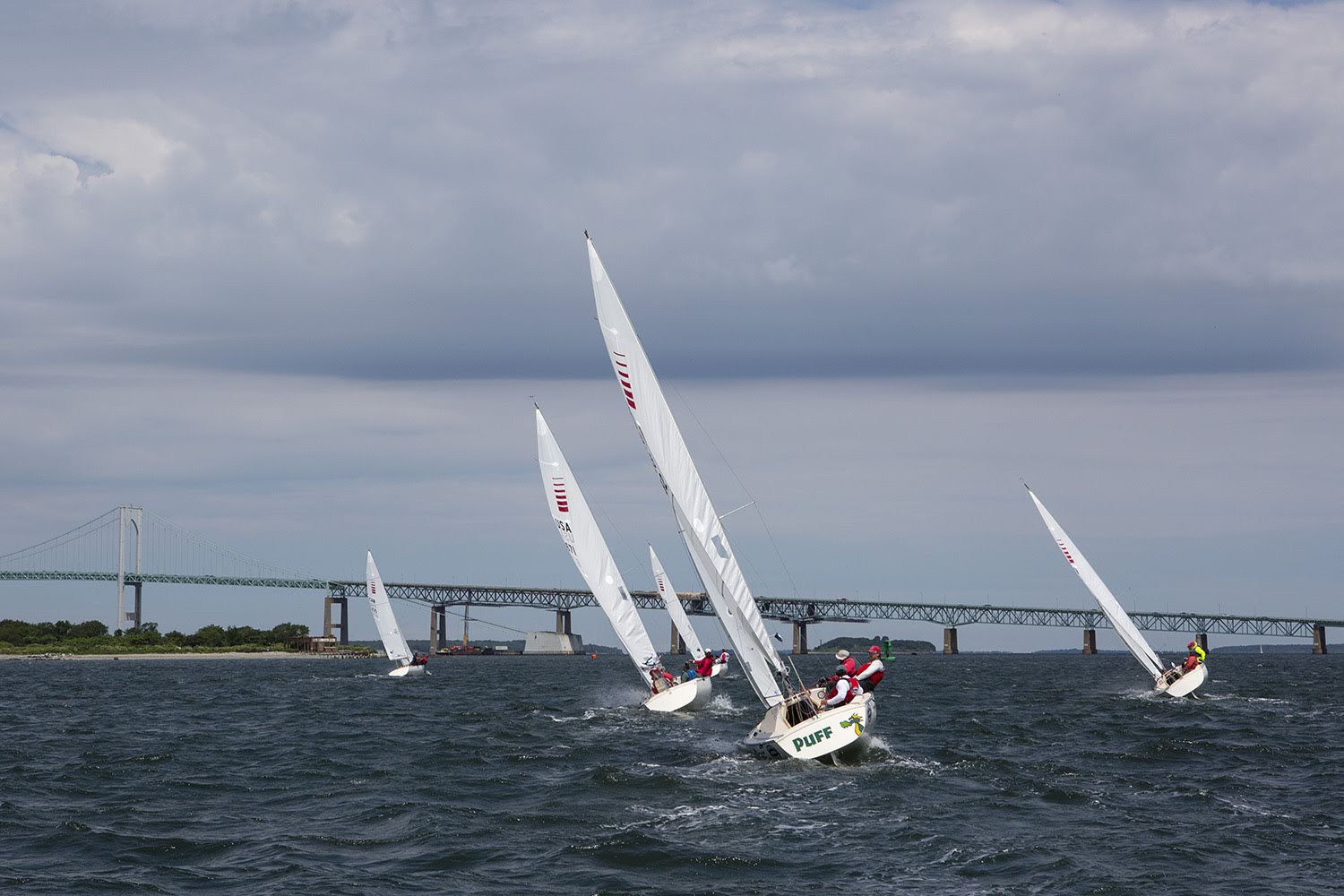 NEWPORT, R.I. (June 27, 2015) – Day two of racing at the 13th C. Thomas Clagett, Jr. Memorial Clinic and Regatta, hosted by Sail Newport in Fort Adams State Park, was under a cloudy sky with an East - South East breeze topping out at 15 knots on Narragansett Bay.

Prior to racing the race committee announced to the Clagett fleet, that at the end of racing today due to a forecast overnight of winds in excess of 30knots that the 25 boats would be hauled out and the race committee would make a decision at 10am tomorrow if the final day of racing would go ahead.

"Safety of the boats and sailors is the priority and we plan to reassess the situation in the morning to see if the conditions are suitable for fair racing," commented Clagett Principal Race Officer, Ron Hopkins (Bristol, RI).

Overnight a retirement in the SKUD 18 fleet from Ryan Porteous (San Diego, CA) and Maureen McKinnon (Marblehead, MA) in race three saw a points change and moved Sarah Everhart Skeels (Tiverton, RI) and Cindy Walker (Middletown, RI) into first on the leader-board. In the five races held today Porteous and McKinnon finished first across the line in four of the five to move them back into the top spot on the SKUD18 results.

"Today was definitely challenging conditions and all about managing the pressure changes. It was great practice and what we are here for, we are learning every day," commented Everhart-Skeels after racing. She continued, " A lot of people would say it's a horrible day for sailing, but I don't agree. You don't know until you are out there".

In the Sonar class Rick Doerr (Clifton, NJ) and his crew Brad Kendell (Tampa, FL) and Hugh Fruend (Freeport, ME) maintained their overnight place at the front of the eight boats racing in the class at Clagett this year. The Canadian Sonar team, skippered by Gold Medalist Paul Tingley, has held onto the second place position, three points astern of Doerr. Rounding out the podium for the Sonar fleet is Andy Fisher (Greenwich, CT).

Kendell, who has rejoined the Sonar team of Doerr, commented after racing, " Sailing together as a team is a lot of fun and this is a priority of the team and has helped us as a team. We will be traveling to the IFDS Worlds in Melbourne as a qualifier for the Rio Games and for us for the US team".

2.4mR sailors had five races today and Dee Smith (Annapolis, MD) continued from where he left off yesterday taking the gun in each race. Peter Wood (Ottawa, Canada) held on to the second place position and after a pre race incident, which forced Charlie Rosenfield (Woodstock, CT) back to the dock for repairs, Ted Green II (North Kingstown, RI) has moved up the leader board into third place.

"I love being back in Newport and racing at The Clagett. This is my sixth year at this event and today it was like the lake sailing at home. The Race Committee did an excellent job today and hopefully we will get to race tomorrow, weather dependant," said Wood on the dock.

Peter Eager (Toronto, Canada) who is doing his first Clagett in the 2.4mR class said, " I heard about the Clagett from Peter Wood, Tracey Schmitt and Tim Ripley and I am really enjoying being here. Yesterday was a refresher day and my results improved today which I'm pleased with."

The final day of racing for the 2015 Clagett is planned for tomorrow and the race committee will advise the fleet by 10am if they will race the final day.