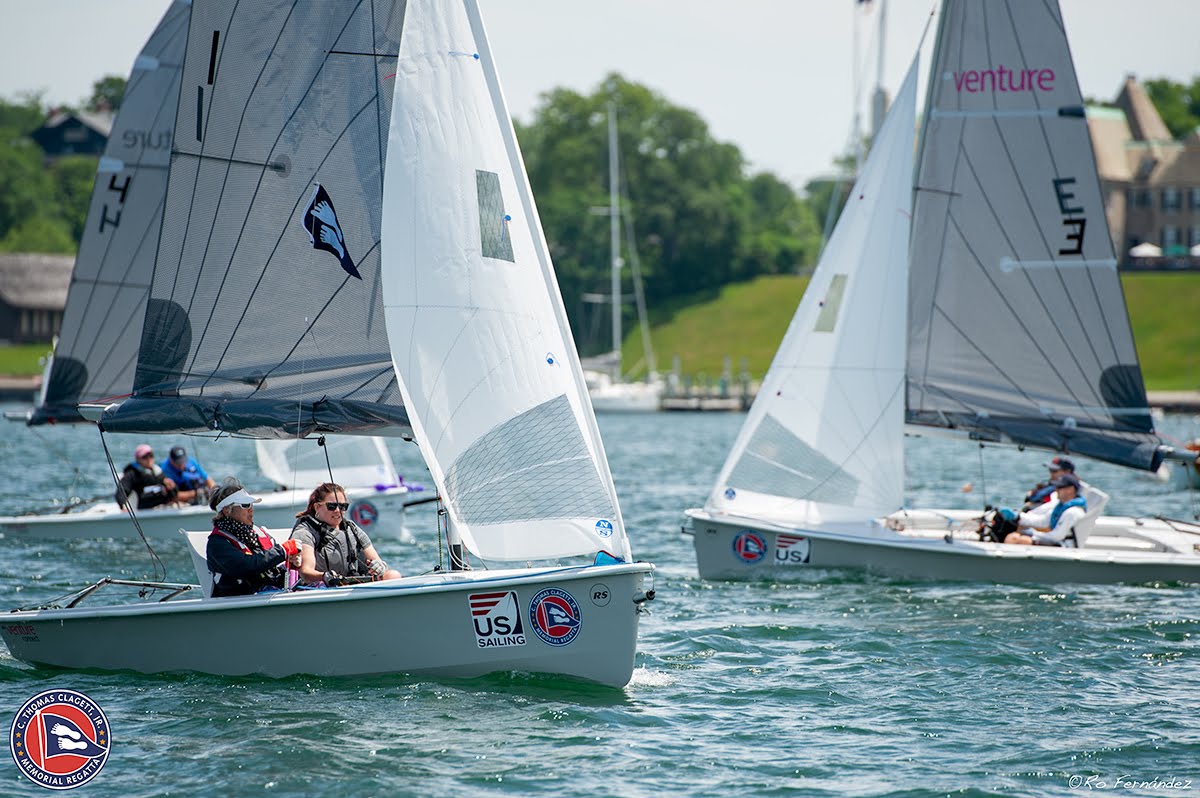 NEWPORT, R.I. (June 22, 2018) – Newport turned on the charm Friday for the 46 sailors racing in the 2018 C. Thomas Clagett, Jr. Memorial Clinic and Regatta and the U.S. Para Sailing Championships. After a short postponement ashore as the Principal Race Officer Tom Duggan waited for the Easterly breeze to come in, the three fleets got the first race nerves out of the way. The race committee had a busy day having to move the course a number of times due to the shifting breeze.

In the 22 boat 2.4mR fleet, Dee Smith (Annapolis, Md.), Julio Reguero (Puerto Rico), and Peter Wood (Ottawa, CAN) relished the predominately Easterly conditions for the four races which fluctuated in strength from seven to 15 knots as it moved around.

“It’s been great to be back at The Clagett, the last time I sailed the 2.4mR was at The Clagett in 2016. The level of sailing just gets better every time I come here and the coaching definitely helps a lot,” commented Reguero who sailed at both the 2008 and 2012 Paralympic Games.

For the four teams racing in the triplehanded Sonar class, it is Rio Paralympic Silver Medalist Rick Doerr (Clifton, N.J.) who is sailing with Dawn Hart (Dade City, Fla.) and Charles McCLure (Brookline, Mass.), and the team from the Midwest of Gary Pierce (Highland Park, Ill.), Patrick LoDuca (Chicago, Ill.) and Jeff Long (Newport, R.I.) who are tied for first place. In second place in the Sonar after racing today is a new team to The Clagett from Texas, David Gaston (Port Bolivar, Texas), Mike Janota (Galveston, Texas) and Kevin Somers (Missouri City, Texas).

Skipper Dave Gaston said after racing today, “This is our first time racing in Newport at The Clagett. We’ve known about it for a while and this was the year to be here. It’s a wonderful opportunity to race against the best in our sport and the coaching has been phenomenal.”

In the RS Connect fleet the seven teams rotated through a round robin race schedule, as the two person teams tested the boat for consideration as a potential for a Paralympic class. Teams from the US and Canada have been making the most of the opportunity to put the boats through the paces. West Coast sailor Fernanda Castelo from San Carlos, California who is sailing with East Coast based Cindy Walker (Weymouth, Mass.), has been sailing the RS Venture Connect in California and this is her first chance to race the boat against other teams.

“This has been a fantastic opportunity to show people how great this boat is. This is my first time sailing with Cindy and my first time at The Clagett. The coaches have pushed us and I see sailing as an equalizer and it teaches camaraderie and innovation. Sailing has taught me how to utilize my equipment (my chair) and it triggers me to be more aware of my senses on land,” said Castelo after they finished up racing today.

Tomorrow’s forecast is for an Easterly breeze ranging from six to nine knots with a chance of showers and thunderstorms in the morning.