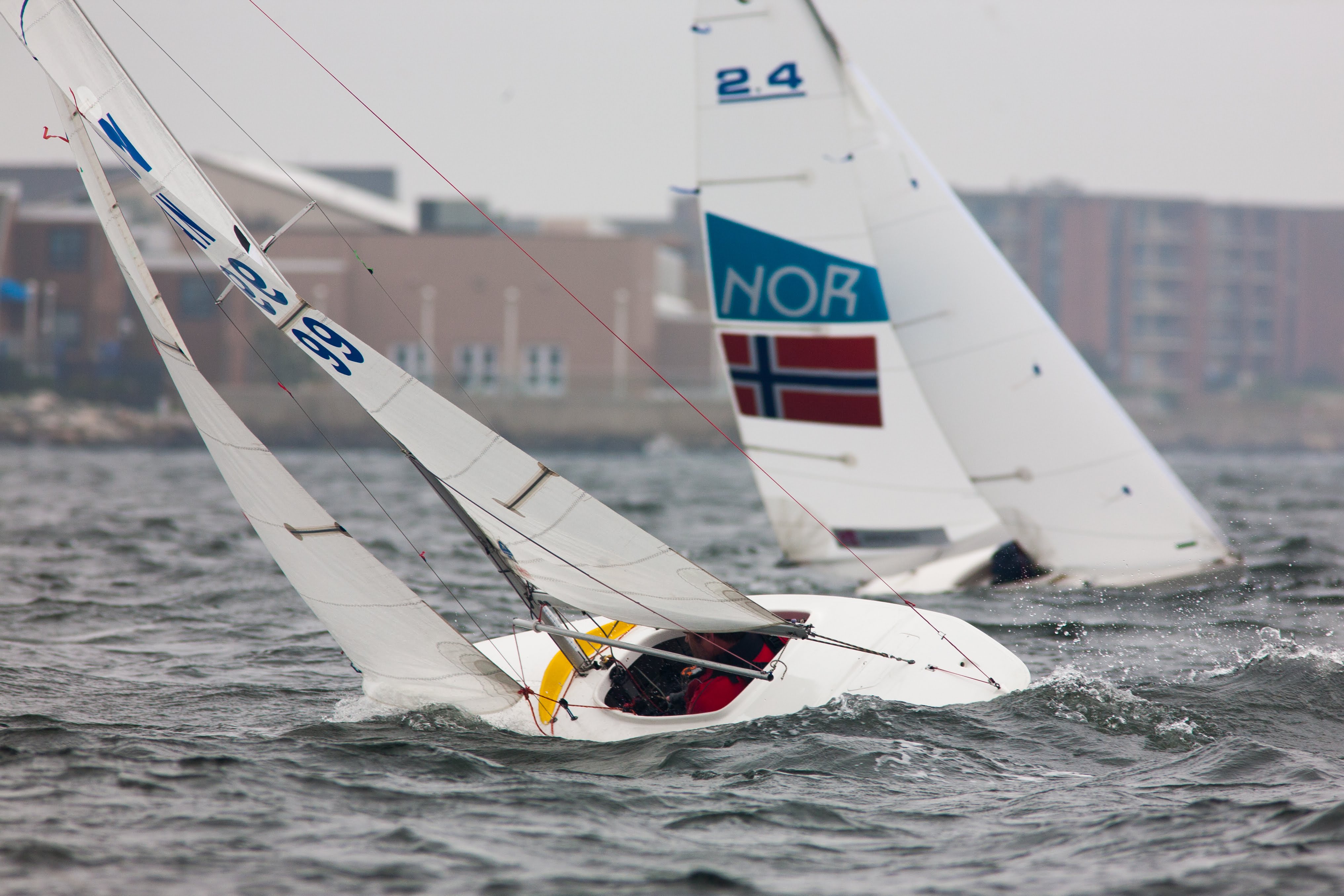 Against the backdrop of over a dozen vessels assembling for the Ocean State Tall Ships Parade of Sail, competitors got down to business on the final day of racing at the 10thannual C. Thomas Clagett Jr. Memorial Clinic and Regatta. Setting courses just off Goat Island, PRO Ron Hopkins was able to run two races for the 2.4 Metre and Sonar classes before a dying northerly, competing with a flooding tide, forced him to abandon while those sailors were mid-race. Observing that conditions were unlikely to improve in the time allowed for racing, the decision was made to send the competitors ashore.

A hard-fought battle took place on the Sonar course where Paralympians and reigning world champions Aleksander Wang-Hansen, Per Eugen Kristianson and Marie Solberg (all Oslo, Norway) had started the day with the lead of the standings – while tied on points – with 2008 Paralympian Rick Doerr (Clifton, N.J.) and crew Gerry Tiernan (Falmouth, Maine) and Hugh Freund (S Freeport, Maine). With the Norwegian team posting finishes of 2-1, and Doerr’s team finishing 3-2, the Norwegians prevailed to take their first class win at The Clagett with 13 points, just one point ahead of Doerr, Tiernan and Freund. The USA’s representatives to the Paralympic Games remained third overall, 12 points out of first place, despite finishing 1-3 in today’s racing. Paul Callahan (Newport, R.I. /Cape Coral, Fla.), Tom Brown (Castine, Maine) and Brad Johnson (Ft. Lauderdale, Fla.), will compete for the first time as a team at the Paralympic Games, although all three have competed in a previous Paralympics. Richard Ramos (Medford, Mass.), Cindy Walker (Abington, Mass.), Duncan Gillespie (Charlestown, Mass.) and Steve Jewett (Winthrop, Mass.) were fourth overall with 37 points.

With the largest turnout of any class in the regatta’s history, the 13-strong 2.4 Metre fleet sailed two races today. With two Paralympians in the fleet – Marc LeBlanc (New Orleans, La.) and Julio Reguero (Guyanbo, Puerto Rico) – as well as 2010 class winner Charles Rosenfield (Woodstock, Conn.), the racing for the podium positions was intense. Reguero and Rosenfield had each won a race thus far in the series and the day started with Reguero in second by just a three point margin over Rosenfield. LeBlanc, who had won two races on the second day of the event, held the standings lead and, despite posting a 2-5 today, held on for the win with a low score of 12 points. Rosenfield had come out guns blazing and took a bullet in the first race, and followed with a second-place finish while Reguero finished fourth in the first race before going on to win the final race of the series. It wasn’t enough, however, for Reguero to hold on to his place in the overall standings as Rosenfield had done enough to move up to second overall on 18 points, followed just one point back by Reguero. Canadian Development Team member Jackie Gay (Victoria, B.C.) finished 6-6 today for a total of 34 points and fourth place overall, with fellow Canadian Peter Wood (Ottawa, Ont.), who did not compete because of equipment problems, finishing fifth overall with 38 points.

“This event is the best event in the United States,” said Reguero, who had utilized the 2008 Clagett as training before representing Puerto Rico in the Paralympic Games that year. “Every time you go in the water you learn a new thing. It is really tough sailing in Newport, so training here with Mark [LeBlanc] and the other guys pushes you to the limits.” Explaining that he hoped to continue improving over the coming weeks, Reguero detailed a heavy training schedule that included the national championships in Finland and Sweden before spending a week at home preparing before travelling to London for the 2012 Paralympics.

In the two-boat SKUD-18 class, Paralympians Jen French and JP Creignou (both St. Petersburg, Fla.) were passed in the standings after Sarah Everhart-Skeels (Tiverton, R.I.) and Brenda Hopkin (Fairmont Hot Springs, CAN) won the lone race in the SKUD-18. “Judy [McLennan] has done a phenomenal job,” said French about the event founder during the awards. “And the race committee went above and beyond to help us train here. It was such a great choice to come race here, and we hope to bring medals back.”

The C. Thomas Clagett Jr. Trophy for 2012 was awarded to Marc LeBlanc (New Orleans, La.) for the second consecutive year. Awarded to the sailor with the best overall performance at the C. Thomas Clagett Jr. Memorial Clinic and Regatta, the trophy was presented to LeBlanc, who will represent the U.S.A. at the Paralympic Games this September in the 2.4 Metre, at the conclusion of racing. LeBlanc won two of the eight races sailed, finished second in five races, and saw his worst finish, a fifth which he was able to discard, in the final race of the series.

“This regatta is a favorite of mine,” said LeBlanc during the awards presentation. “You can show up in the shirt on your back and go sailing for three days and not worry about a thing.”