No Rain Check Needed for Day One of Racing 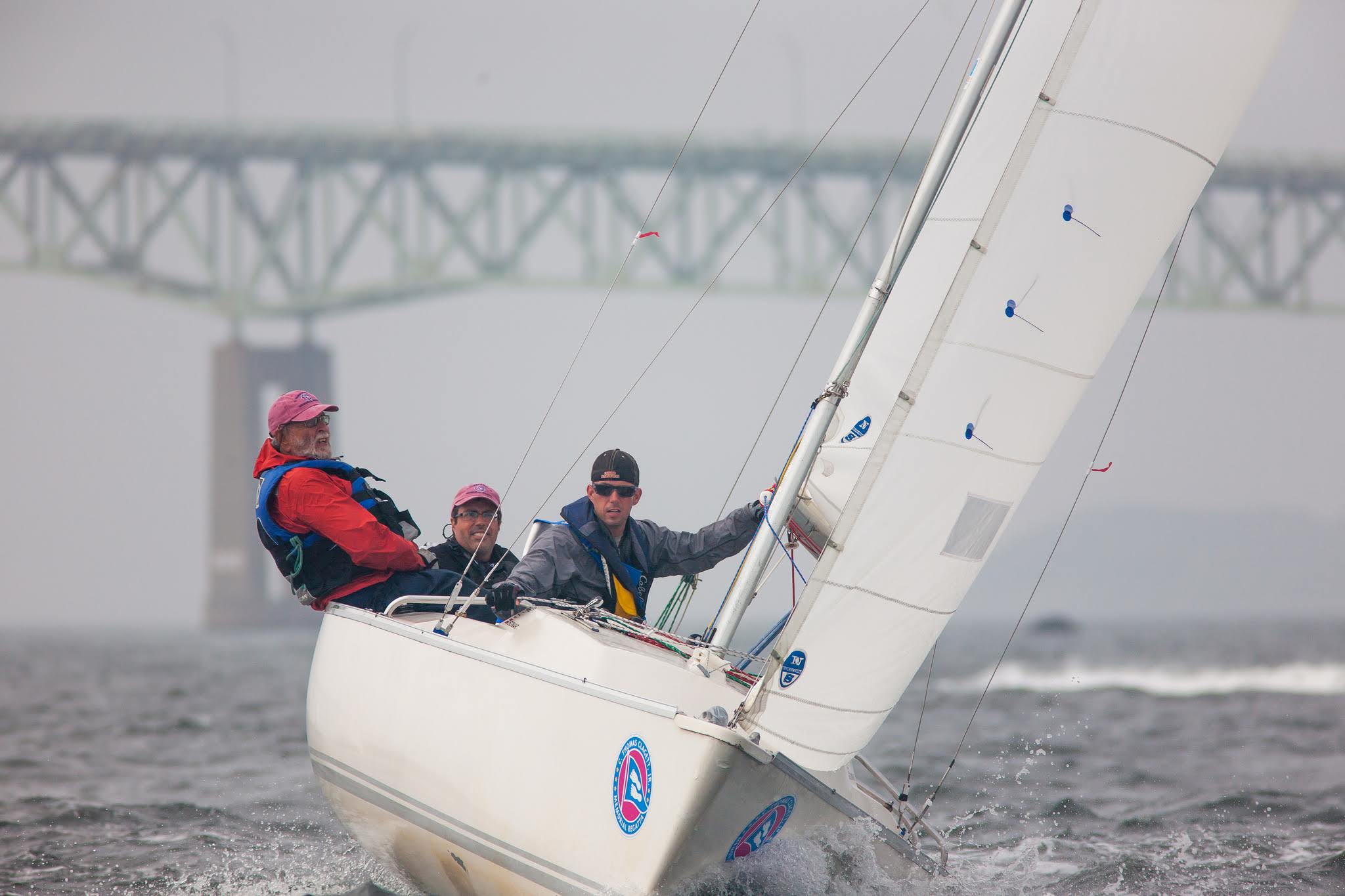 NEWPORT, R.I. (June 28, 2013) – Although stormy weather and heavy fog taunted Narragansett Bay this morning, competitors were not ready to take a rain check on the first day of racing at the 11th annual C. Thomas Clagett Jr. Memorial Clinic and Regatta. Held at Fort Adams State Park in Newport, R.I., the event is North America’s premiere regatta for sailors with disabilities and utilizes the same equipment used in the Paralympic Games: the single-person 2.4 Metre, the two-person SKUD-18, and the three-person Sonar.

“Today we had a delay from 11:00 until about 1:30 due to low visibility on the water,” said Principal Race Officer Ron Hopkins (Bristol, R.I.), adding that right when the Race Committee noticed a break in the fog, they took advantage of it and sent competitors out to the course located between Rose and Goat Islands. “We had about a two hour window before the fog started rolling in again and were very happy to get two races off in all three fleets. There was good pressure from the south and southwest, starting at about eight to ten knots and then piping up to around 14 to 15 knots later in the day.”

The four-day event kicked off yesterday, June 27, with its signature one-day clinic that allows competitors to practice with top-tier coaches and improve their skill set before hitting the race course for competition over June 28-30.

The 2.4 Metre fleet boasted the largest number of competitors, with 15 boats, and that didn’t stop Puerto Rico’s two-time Paralympic representative (2008, 2012) Julio Reguero, of Guyanbo, from finishing first in both races, even after being over the line early in race two. “This is my third or fourth time doing the Clagett,” said Reguero. “This regatta is really nice; the atmosphere and the people are great and I really like coming here.”

Moving into the weekend, Reguero has his work cut out for him, with many fierce competitors at his heels, including Daniel Evans (Miami, Fla.) who took fifth at the ISAF Sailing World Cup Miami, earning him a place on the 2013 US Sailing Team. Evans sits in second place with six points followed by Charles Rosenfield (Woodstock, Conn.) and newcomer Ted Green (Newport, R.I.), both with seven points.

There is a lot of pressure on the SKUD-18 fleet with this regatta being designated as the qualifying event that determines the four sailors (two teams) who will become members of the 2013 US Sailing Team Sperry Top-Sider. After today, Sarah Everhart Skeels (Tiverton, R.I.) and Gerry Tiernan (Falmouth, Maine) are tied for first-place with first-time Clagett competitor Ryan Porteous (San Diego, Calif.), who is sailing with Cindy Walker (Abington, Mass.).

“It’s exciting to have Ryan out here from California and getting some young blood in our SKUD sailing fleet,” said Everhart Skeels who took first-place in the fleet last year. “I’m looking forward to a weekend full of close racing.”

With only four days, total, of sailing a SKUD-18 under his belt, Porteus is proving to be a natural. “I’m looking forward to the rest of the weekend. We don’t have these boats on the West Coast and they are really fun to sail.”

Moving into the weekend, the Race Committee hopes to get approximately 12 races completed and expects that conditions will be similar to today with unstable weather patterns and poor visibility.