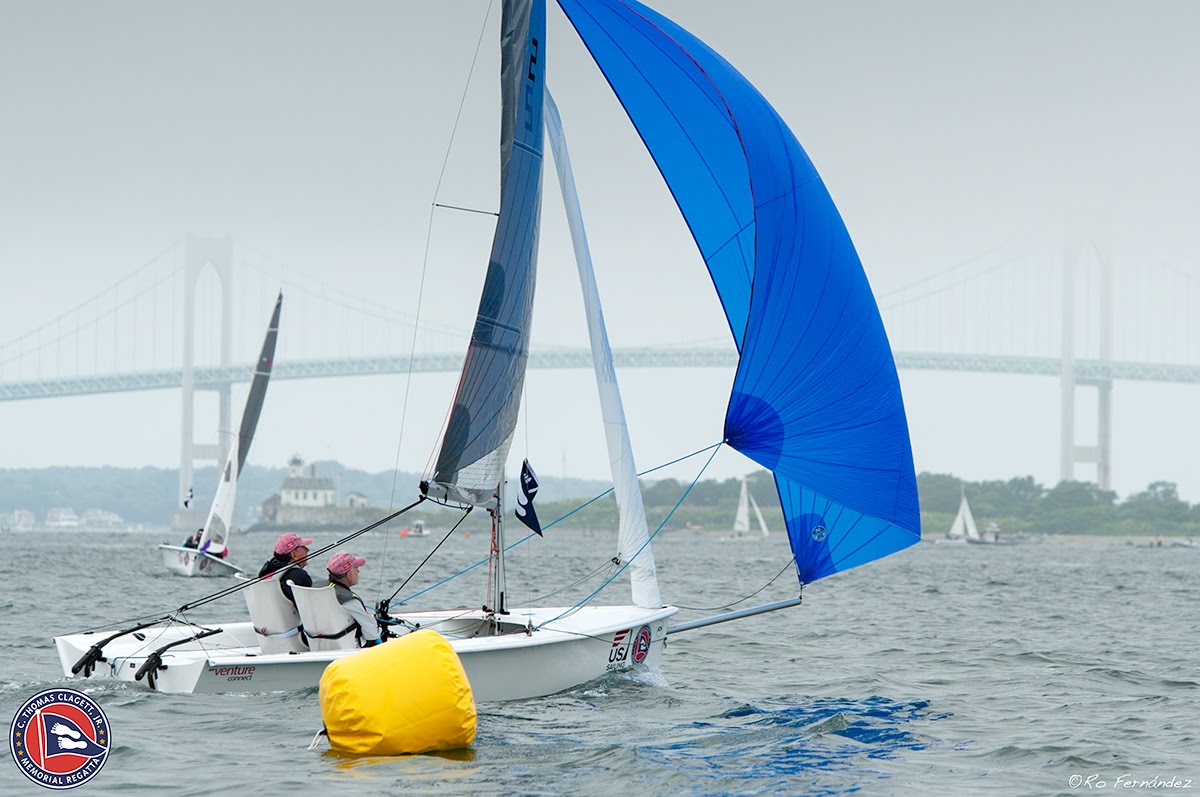 NEWPORT, R.I. (June 23, 2018) – Conditions for day two of the 2018 Clagett Regatta and U.S. Para Sailing Championships, hosted by Sail Newport, was a complete 180 to day one with a gray, overcast day greeting the 44 sailors. The Race Committee took the three classes out to the course in a very light breeze that started out in an Easterly direction and moved to a North Easterly.

Overnight leader in the 2.4mR class, Dee Smith (Annapolis, Md.) has held on to his single digit results to stay in first place after today’s three races. Completing the podium in the 22 boat fleet after racing today are Julio Reguero (Guaynabo, Puerto Rico) and Peter Wood (Ottawa, Canada).

“I love sailing here in Newport, the tidal aspect of racing here is very different to the lake racing we do at home, it definitely impacts the on water decisions. This is a great learning regatta and the town of Newport and the racing are always fun. It’s a great opportunity to race against people from all over North America,” commented Wood who is the highest placed Canadian sailor in the 2.4mR class after two days of racing.

Sonar sailors managed to finish three races for the day and Rick Doerr (Clifton, N.J.) and his crew of Dawn Hart (Dade City, Fla.) and Charles McClure (Brookline, Mass.) have retained their first position in the fleet. The team based in Chicago consisting of Gary Pierce (Highland Park, Ill.) and Patrick LoDuca (Chicago, Ill.) who are sailing with Newport local sailor Jeff Long, are still in touch with Doerr, just four points behind in second place. The Texan team of David Gaston (Port Bolivar, Texas), Mike Janota (Galveston, Texas) and Kevin Somers (Missouri City, Texas) are holding on to third place.

Chicago based sailor Pierce, who is racing at his fourth Clagett Regatta, remarked after racing, “It’s been a great day of racing today and the coaching clinic with Dave Perry was fantastic, I learned a lot from his method of coaching. It’s definitely different sailing here in Newport to the racing we have on the lake in Chicago, the lake always has bigger waves.”

The RS Venture Connect sailors finished up the round robin schedule and for the last day of racing will be semi finals and finals. The Canadian team of John McRoberts (Victoria, BC) and Scott Lutes (Mahone Bay, NS), both of whom are former Paralympians, and the bi-coastal U.S. team of Christina Rubke (San Francisco, Calif.) and Kris Scheppe (Naples, Fla.) have guaranteed themselves a place in the finals. The top two teams from the semi finals tomorrow will join them to race for the class title tomorrow.

“It feels like being home to be back racing at The Clagett. I’ve seen lots of familiar faces and a lot of new ones in particular female sailors joining the ranks, which is great. I last sailed at this regatta with my wife Jackie in the SKUD 18 and we won so to be back here sailing with Scott brings a new dynamic to the boat,” said McRoberts.

Racing in the 2018 Clagett Regatta and the U.S. Para Sailing Championships concludes tomorrow and trophies for both regattas will be awarded. The forecast for tomorrow is for a Westerly breeze of around five knots becoming South West in the afternoon.