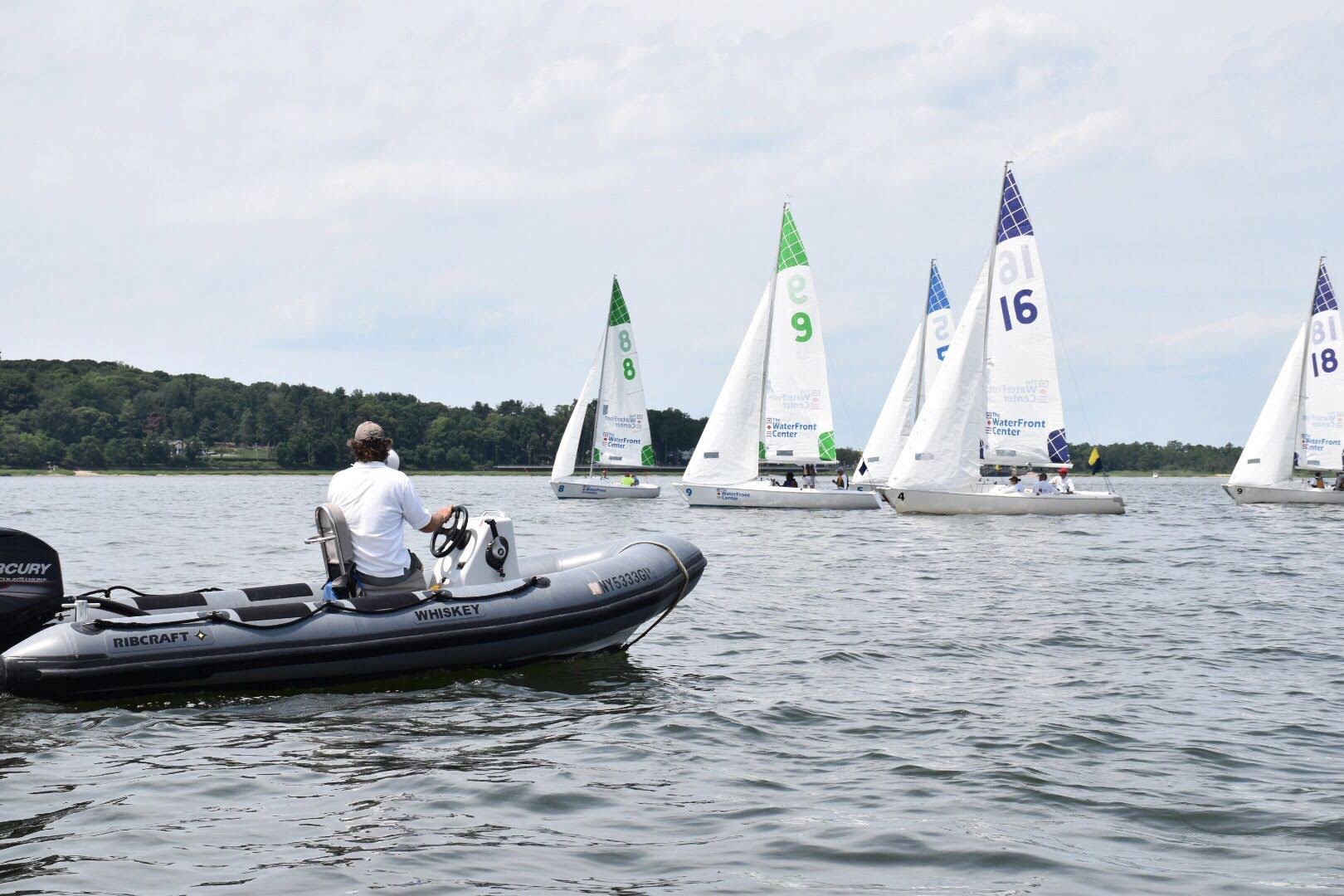 NEWPORT, R.I. (January 31, 2017) – In 2016, the C. Thomas Clagett, Jr. Memorial Clinic and Regatta and Oakcliff Sailing Center in Oyster Bay NY along with The Waterfront Center, joined forces to create the Clagett/Oakcliff Match Race regatta for disabled sailors. The inaugural event, which was hailed an enormous success by the sailors who participated, had eight teams in attendance. Coaching was provided by world recognized match racer Dave Perry (Southport, CT), and he will again be returning to coach the sailors in 2017.

Sarah Everhart Skeels (Little Compton, RI), who took part in the first Clagett/Oakcliff Match Racing in 2016, remarked, "I think this event is going to be even better than last year because not only do we have coaching for the best match racing from Dave Perry but the race management and venue are top notch. Thanks to Seawanhaka Corinthian Yacht Club and The Waterfront Center there will be 10 boats available, meaning 10 teams can come, learn and compete, it's going to be an awesome event!"

The event was created to fill a void for disabled sailors who wanted to experience the racing format of match racing versus fleet racing. The 2017 event, which is scheduled for August 25-27, will be raced in Sonars again. Sonars from both The Waterfront Center and Seawanhaka Corinthian Yacht Club will be utilized and this year will have an increase in the number of teams taking part to 10 teams.

The first one and a half days of the 2017 event schedule will be dedicated to coaching and practice followed by one and a half days of match racing. Teams from across the US will be returning to take part along with teams who due to Paralympic commitments in 2016 were not able to attend. 2016 US Paralympic silver medalist Rick Doerr will be racing at the event in 2017 and other international teams from Canada, parts of Europe and the Caribbean have expressed interest in attending.

Teams from 2016, with adaptive needs sailors, are being invited to return to take part this year. Teams should form themselves and are being encouraged to bring a "new face" in their teams to help encourage growth in adaptive sailing participation. There will not be any classification of disabilities, but each team should self identify as being comprised of at least one sailor, the skipper, with a disability.

Organizers will again use the round robin format for racing so that the sailors will all sail against each other.

A number of organizations contribute to the success of the event and for the second year the Warrior Sailing Program, will provide the adaptive equipment for the sailors and helping install it along with Bam Miller (Oyster Bay, NY) and Brian Skeels (Little Compton, RI) and SailAhead's military veterans will be involved as on water safety officers and rescue swimmers.Both these organizations assisted with the inaugural event and continue this support in 2017.

"The Clagett team are looking forward to seeing many of the sailors who had the opportunity to take part in the 2016 Clagett/Oakcliff Match Race regatta returning along with new faces. It will be great to have the US Paralympic Sonar team skipper, Rick Doerr (Clifton, NJ), join the group and get to see for himself what all the excitement was about in 2016. We hope that other Paralympians who have expressed interest in the event will be in Oyster Bay in August as well," commented Clagett President and Co-founder Judy McLennan (Portsmouth, RI).

"Last year’s Clagett / Oakcliff Match Race was a huge success. We had eight teams new to match racing, coached by one of the premier match race coaches in the world, Dave Perry. In a two day event they learned the basics of match racing and started racing. All of the competitors had a great time and demanded we repeat this year. We are adding another day, two more teams and an additional coach for more fun and learning," said Oakcliff Sailing Race Program Director Bill Simon (Oyster Bay, NY).