Champions are crowned at the Clagett Regatta and the 2018 U.S. Para Sailing Championships 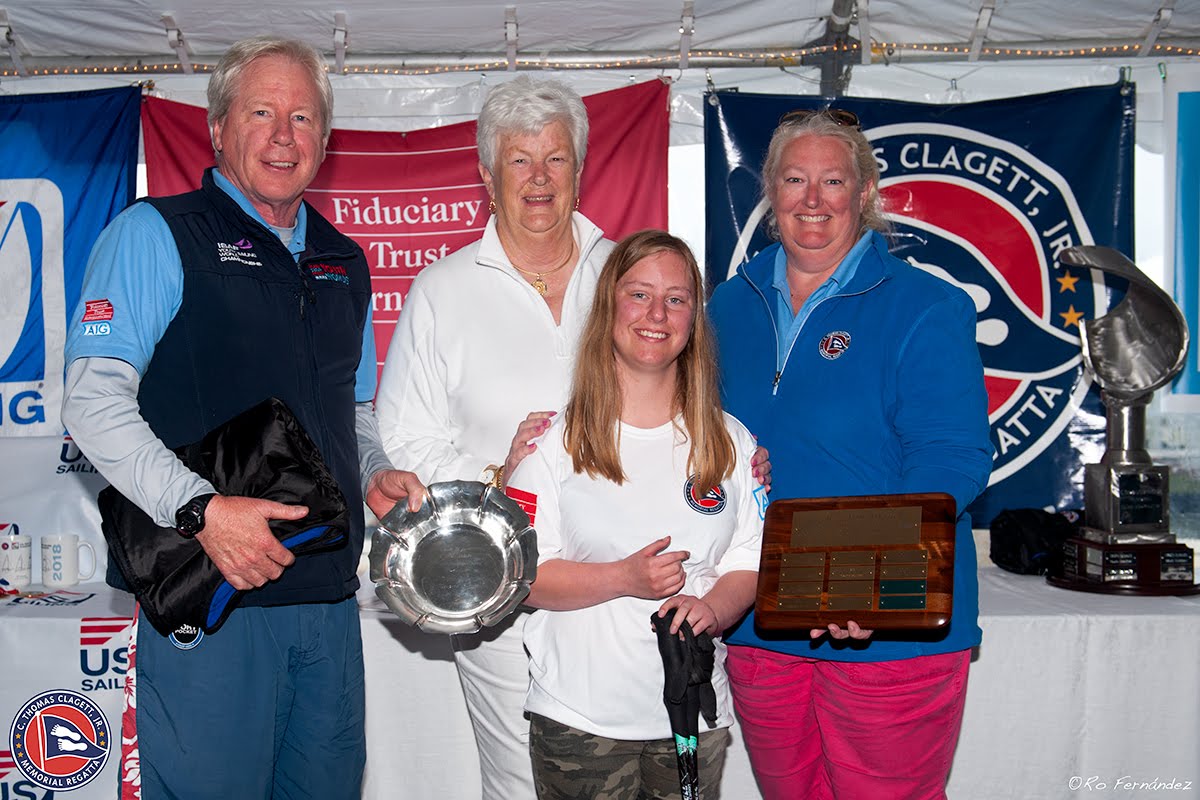 NEWPORT, R.I. (June 24, 2018) – The 16th C. Thomas Clagett, Jr. Memorial Clinic and Regatta and the 2018 U.S. Para Sailing Championships have been run and won. Three days of racing, 10 races and the 46 sailors from across North America are now celebrating with the newly crowned champions.

“We’ve just concluded the 16th Clagett Regatta and we couldn’t do it without the support of the volunteers, sponsors, supporters and especially the sailors. We’re so thrilled that we’ve been able to join forces with U.S. Sailing to host the U.S. Para Sailing Championships this year. We are working together to demonstrate the interest in sailing and to get it reinstated to the Paralympics,” remarked Clagett President and Co-Founder Judy Clagett McLennan (Portsmouth, R.I.).

In the triple-handed Sonar class Rio Paralympian and Silver Medalist Rick Doerr (Clifton, N.J.) sailed in this regatta with a graduate of the Warrior Sailing Program Dawn Hart (Dade City, Fla.) and Charles McClure (Brookline, Mass.). They lead the Sonar fleet from start to finish over the three days. Making Doerr and his crew work for their medal was the team from Chicago of Gary Pierce (Highland Park, Ill.), Patrick LoDuca (Chicago, Ill.) and Jeff Long (Newport, R.I.), who secured second place overall.

“Thank you to my crew members they are real troopers. The competition pushed us and the level just keeps going up. The training is like no other regatta and it’s just fantastic to be here with all these great sailors,” commented Doerr after prize presentation. He continued after the being presented the Nick Scandone Award, “Nick inspired me a lot when we sailed in Beijing. It isn’t about this award it’s about being part of this group and these sailors. The challenges we have to overcome as sailors makes the results worthwhile. We owe it to others to set a high bar and pass on own knowledge to the future generations. Nick gave back and now I’m doing it and so is everyone else at this regatta.”

The 22 boats in the singlehanded 2.4mR fleet have had some fantastic racing with the Principal Race Officer Tom Duggan (East Sandwich, Mass.) commenting after the three days of racing, “It’s a super competitive fleet.” This fleet was peppered with Paralympians and nearly half the fleet have traveled from all parts of Canada to race at The Clagett and U.S. Para Sailing Championships.

Eventual winner in the largest fleet at the regatta, Dee Smith (Annapolis, Md.) managed to hold off the challengers from Puerto Rico and Canada, of Julio Reguero (Guanynabo, Puerto Rico) and Peter Wood (Ottawa, Ontario, Canada), to take home the gold medal with Reguero taking silver and Wood the bronze.

Smith commented after presentation, “I haven’t been to The Clagett for three years and I want to say thank you to everyone for continuing all their work for this regatta. I give you my congratulations to all the competitors, everyone is getting better and the competition is going to the next level and it has a lot to do with the coaching that The Clagett provides.”

A new class to adaptive sailing and The Clagett, the RS Venture Connect, had seven teams racing in a round robin competition over the first two days of racing to make it to the semi finals Sunday. The top four teams headed in to the finals and it was the former Paralympic duo from Canada of John McRoberts (Victoria, BC, Canada) and Scott Lutes (Mahone Bay, NS, Canada), who sailed in to the top place. In the U.S. Para Sailing Championships the bi-coastal U.S. team of Cristina Rubke (San Francisco, Calif.) and Kris Scheppe (Naples, Fla.) were awarded the silver and the bronze medal went to JR Hardenburgh (Jamaica Plain, Mass.) and Nick Bryan Brown (Jamaica Plain, Mass.).

“I am very pleased to be back sailing at The Clagett, I’m really pleased to see so many new sailors this year and to have new sailors joining the ranks,” commented McRoberts who will be racing with Lutes again in the RS Venture Connect at the Para Sailing World Championships later this year in Sheboygan, Mis. McRoberts and Lutes were announced as the winners of the C. Thomas Clagett, Jr. Trophy, “It’s a true honor and I’m very, very shaken to be awarded this trophy,” remarked McRoberts.