Challenging conditions for day two of the 15th Clagett 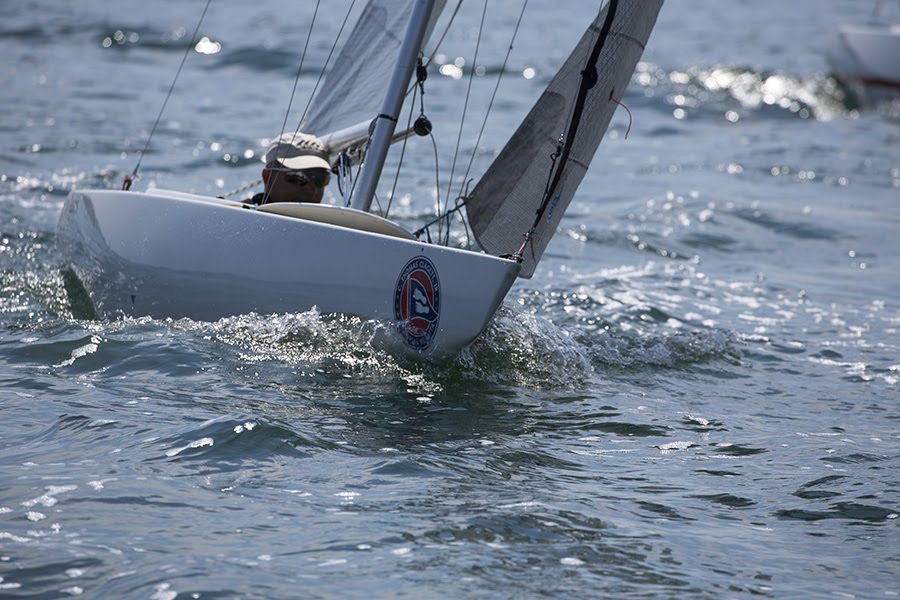 NEWPORT, R.I. (June 24, 2017) – Mother nature decided the turn on a performance for the second day of racing at the 15th C. Thomas Clagett, Jr. Memorial Clinic and Regatta, and in turn the race committee delayed the start of racing by two and a half hours to allow thunderstorms to pass.

Once the sailors from across the US and Canada arrived at Sail Newport in Fort Adams State Park, the race committee held them ashore for a little longer to let the breeze build.

Heading into the fourth race of the series for both the 2.4mR and Sonar classes, the wind was fluctuating across the West to North compass quadrant and put the race committee to the test when they had to make two course changes in the first race of the day.

Principal Race Officer, Tom Duggan (East Sandwich, MA) commented after the three races held today, "The wind was really shifty and we a the full range of wind strengths out there today. We are hoping to get in at least three races tomorrow."

In the three boat Sonar class, the team from Y-Knot sailing program from Lake George, NY had a successful day taking home two firsts and a second. They will now go into the last day of racing tomorrow with a three point lead over the Sonar team from Chicago.

Dave Whalen, skipper of the Y-Knot Sonar, spoke after racing today, " It was an exhilarating day today and a totally unanticipated experience." Whalen, who steers the boat using the Sip and Puff system continued, " There are a lot of people who made this come together and I have a huge amount of thanks to them. We as a program want to really work on our team work and boat handling skills."

Sailing with the Y-Knot program is Spencer Raggio, who is the Committee Chair with the program, spoke about the plans for the team going forward.

"We have three Sonars at Y-Knot and this has allowed us to increase our training capacity. Our plan is to be at the Clagett/Oakcliff Match Racing regatta in Oyster Bay in August and maybe if we can organize it have two Sonar teams from Y-Knot at the 2018 Clagett in Newport. We had a close to perfect day today and it was only by a couple of seconds that we finished second in a race that we had a technical issue with the jib. Dave used the Sip and Puff system all day to steer and our results are very encouraging."

The 18 2.4mR boats, a record fleet number for The Clagett, also raced three races after the delayed start. Tony Pocklington from Ft. Meyers, Florida maneuvered his way in to first overall, after a personal best ever day of results in the 2.4mR with a 1,2,1 scorecard.

"I had good starts and I took advantage of the great coaching we've had here at The Clagett. I first sailed a 2.4mR in 2012 and all I can say is once you get into one (a 2.4mR) you will love it."

Racing concludes tomorrow for the 15th Clagett and the forecast is for the day to start out with a Westerly breeze starting out at five knots, becoming a Southerly of 10 to 15 knots with gusts up to 20 knots in the afternoon.