Breeze On for Day Two of Racing 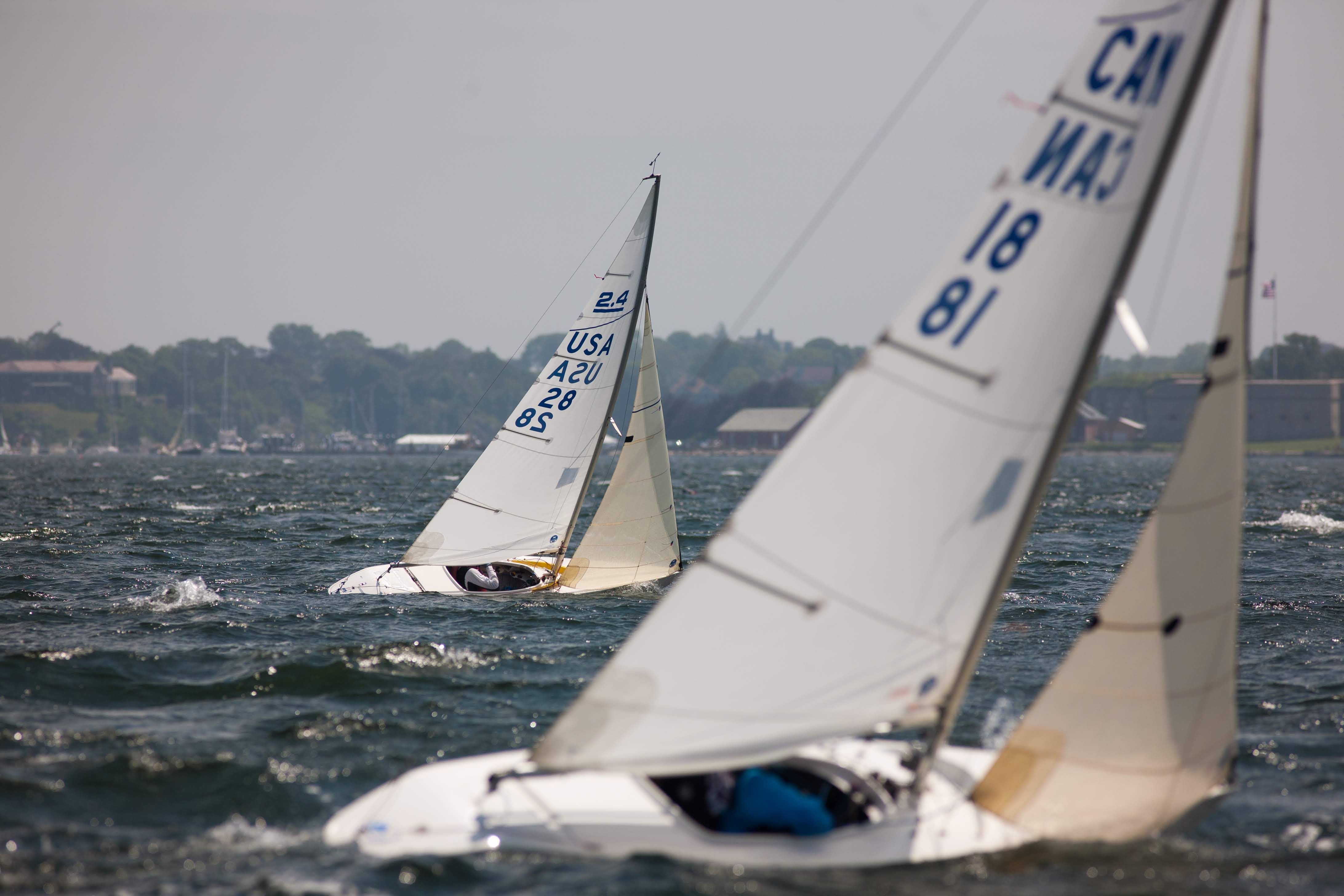 The breeze switched on in a big way today at the 11th annual C. Thomas Clagett, Jr. Memorial Clinic and Regatta, where 36 sailors with disabilities, sailing 23 boats in three Paralympic classes on Narragansett Bay, showed what they were made of. “The Clagett,” as it is affectionately called, is sailing out of Sail Newport at Fort Adams and is in its second of three racing days. The event’s reputation, as both a training ground for Paralympic hopefuls and a perfect environment for developing raw disabled sailing talent, is renowned across North America, if not around the world. In fact, at the last two editions of the Paralympic Games (2008 and 2012), six medals were won by veterans of The Clagett.

In the single-person 2.4mR class, Puerto Rico’s two-time Paralympian Julio Reguero added three victories to his score line today, after winning both of yesterday’s races. He said that he “got lucky” in today’s last race when Ted Green (Newport, R.I.) broke his mast on the second of two windward legs. Green, a SUNY Maritime student, primarily sails Lasers and had never sailed a 2.4mR until he participated in the Clagett’s pre-regatta clinic, was leading Reguero, who was in second, by over a minute at the windward mark when his mast snapped in two places, putting a dramatic end to what had looked like a sure victory.

“I had a considerable amount of backstay on, but the breeze called for that,” said Green. “I thought I was doing the right thing, but the rig didn’t want to take it in the end.”

After racing, Reguero commented: “He (Green) is good. He is new here, but he has a good background in sailing. When it’s your first time on this boat, you do well because you just sail it. It’s when you start playing around with things and start pulling ropes and adjusting things to go faster that you go backwards.”

Reguero now stands a full 10 points ahead of Daniel Evans (Miami, Fla.), who is in second overall in the 2.4mR class.

In the three-person Sonar class, Paralympian Rick Doerr (Clifton, N.J.), Hugh Freund (S. Freeport, Maine) and Lindsay Smith were joined today by Brad Kendell (Tampa, Fla.), who is the main sheet trimmer for the Doerr/Freund/Kendell trio that is ranked on the US Sailing Team and has its sights set on the 2016 Paralympics. Early this morning, Kendell took the ferry from Block Island where he was competing with Andy Fisher (Greenwich, Conn.) on Fisher’s Swan 42 in Block Island Race Week. Fisher, too, arrived this morning at The Clagett to take the helm of his own Sonar, which yesterday was steered to first place overall in the class by Tom Brown (Castine, Maine), a two-time Sonar Paralympic medalist for the USA, who was standing in for Fisher until he arrived.

“It didn’t bother us too much that Tom beat us in two races yesterday, because we almost caught him in the first race,” said Doerr. “Today, Andy (Fisher) had to change gears from driving his big boat to steering one of these, so we took advantage of him in the first and second race.” Doerr, who posted a 1-1-2-1 to Fisher’s 2-2-1-2, said that this morning the wind was lighter, but when the sun came out the wind picked up. “We felt slower, so we had to dial our rig up, but the main trimming was smooth like butter, and we were a rocket ship again.”

Going into tomorrow’s final race, Doerr’s team is tied on points with Fisher’s team, but Doerr is, according to scoring rules, in first place because he beat Fisher in today’s last race.

In the two-person SKUD-18, Sarah Everhart-Skeels (Tiverton, R.I.) and crew Gerry Tiernan (Falmouth, Maine) showed their expert boat handling skills to win three of five races sailed today. The team, which climbed from second to first in the overall standings and now has a two-point edge on yesterday’s leaders Ryan Porteus (San Diego, Calif.) and crew Cindy Walker (Abington, Mass.), also made it absolutely clear their intentions of claiming a spot on the 2013 US Sailing Team Sperry Top-Sider, which has designated this event as its qualifier for two SKUD-18 teams.

With a total now of seven races sailed in this class, each team was allowed to drop its worst score. Everhart-Skeels and Tiernan dropped today’s final race, which they did not finish, because their spinnaker wrapped around the front of the boat and could not be retrieved. “It was really windy; everybody had a mistake, and that was ours,” said Everhart-Skeels. “Thankfully, we didn’t have to cut it away.” She added that a coach had to jump on the boat to help. “We really had a good time, and used the wind to our advantage.”